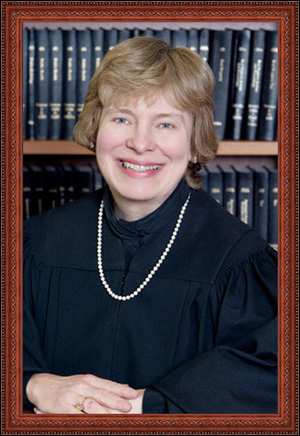 Susan Phillips Read was born in 1947 in Gallipolis, Ohio, the second of the three daughters of Gomer W. Phillips, who owned and operated a men’s clothing and shoe store for many years before returning later in life to his first love, teaching, and Elizabeth Phillips, a medical records librarian. Growing up in Gallipolis, a small town on the banks of the Ohio River, Judge Read developed her lifelong passions for reading, music (especially piano and voice), swimming, spectator sports (particularly football) and ballet — especially the New York City Ballet, which was often showcased in the variety hours broadcast during the early days of network television.

Judge Read attended public schools in Gallipolis and graduated from Gallia Academy High School in 1965. Following family tradition, she pursued her undergraduate studies at Ohio Wesleyan University in Delaware, Ohio, from which she graduated in 1969. In 1972, Judge Read received her law degree from the University of Chicago Law School, Chicago, Illinois, where she acquired a taste for legal scholarship.

During a brief stint after graduation at the United States Atomic Energy Commission’s headquarters in Bethesda, Maryland, Judge Read married a devout upstate New Yorker, Howard Read, whom she had met at law school. She relocated from Washington, D.C. to Albany, New York in 1973, and was admitted to the New York State Bar in 1974.

Judge Read was a staff attorney at the Central Administration of the State University of New York from October 1974 until August 1977, when she left for a position with the General Electric Company. She held a series of in-house counsel positions with GE in Schenectady and Waterford, New York; from 1980 until mid-1985, she was GE’s Chief Environmental Counsel nationwide and maintained offices in Schenectady, New York and Fairfield, Connecticut. Judge Read departed GE in early 1988 for private practice at the Syracuse-based law firm of Bond, Schoeneck and King, where she was a resident partner in the firm’s Albany office. In early 1995, Judge Read left private practice to serve as Deputy Counsel to the Governor in the Pataki Administration.