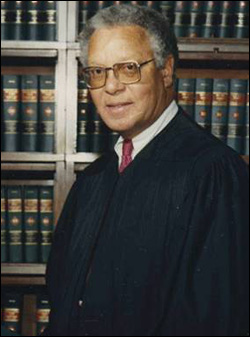 Reuben K. Davis was born in Columbus, Mississippi in 1920. He served for three and one half years in the United States Army during World War II, and received an undergraduate degree from Virginia State College and a LLB from Boston University School of Law in 1949. He was admitted to practice on March 2, 1950 and began his legal career in Brooklyn, New York. In 1955 he moved to Rochester and practiced law as a partner with the law firm of Hurst & Davis for 11 years.

From 1966 to 1967 Davis served as a Deputy Corporation Counsel for the City of Rochester. In March of 1967 he was appointed as the first African American Rochester City Court Judge. He was then appointed Commissioner of the Bureau of Buildings & Property Conservation and served from 1968 to 1970. He was elected to a full term on the Rochester City Court in 1974 and to State Supreme Court in 1982. He was designated to the Appellate Division, Fourth Department by Governor Mario Cuomo on January 1, 1987, and served as an Associate Justice until his retirement on December 31, 1996.

After retiring from the Bench, Davis was appointed to the state-wide panel of mediation and arbitration for Empire Mediation & Arbitration, Inc., a private dispute resolution company. Later that year he was named to the Frederick H. Minnet Professorship at the Rochester Institute of Technology. For the last several years of his life, he served as a Judicial Hearing Officer in the Seventh Judicial District.

Davis died in Hilton, New York, on Tuesday, March 9, 2010 at the age of 89. He was survived by his wife, Elizabeth U. Davis; and his three children, Jennifer Carey (Bob), Andrea Zopp (William), Mark A. Davis; and three step-children, Andrea Muhly, Peter Muhly (Barbara), Alexandra Muhly; and ten grandchildren. A scholarship fund was established in his honor at Virginia State University.

Throughout Justice Davis’ career, he was actively involved in several community activities including: Monroe County Human Relations Commission (Chair), Past President of the Rochester N.A.A.C.P., trustee of the Monroe County Bar Association from 1964 to 1965, a member of the governing body of the U.N.C.A. of Greater Rochester, trustee for the Memorial A.M.E. Zion Church, the Rochester Chamber of Commerce, the Center for Governmental Research, and of the Montgomery Neighborhood Center. Davis also served on the Board of Directors of the Greater Rochester YMCA and
the Rochester Business Opportunities Corporation.