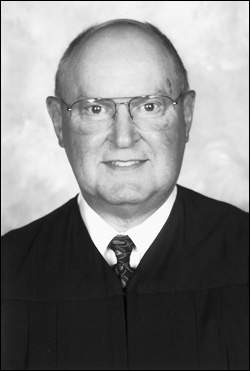 Justice Carl J. Mugglin was appointed to the Third Department effective June 14, 1999. Born in Walton, Delaware County, he is a graduate of the College of Business Administration and the College of Law at Syracuse University. After admission to the Bar in 1962, Justice Mugglin engaged in the general practice of law and served as a confidential law secretary to a judge and one term as Delaware County District Attorney. He was elected a Supreme Court Justice for the Sixth Judicial District in 1985 and was re-elected in l999. He maintained chambers in Walton. He retired from the bench in 2007.