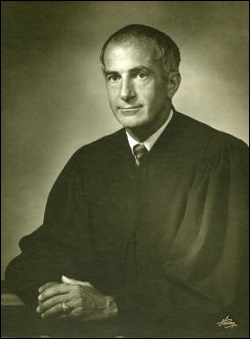 In 1986, Judge Hancock was appointed to the Court of Appeals. See his full biography HERE.

Stewart F. Hancock, Jr. was born in Syracuse in 1923, he is the grandson of the Court’s third Presiding Justice, Hon. Peter B. McLennan. He is a graduate of Cornell Law School and was admitted to practice on September 20, 1950. He practiced law in Syracuse with the law firm of Hancock and Estabrook from 1952 until 1961 and from 1964 until 1971. In 1962 he became Corporation Counsel for the City of Syracuse. He was elected to the Supreme Court in 1971 and was designated to this Court in 1977. He served as an Associate Justice until he was appointed to the Court of Appeals in 1986. He retired from the Court in 1993. He currently resides in Syracuse where he practices law with the law firm of Hancock & Estabrook.