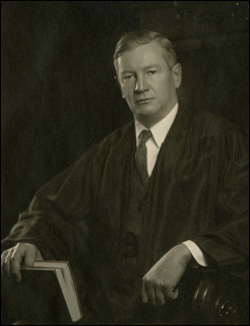 Justice McCurn also sat on the bench of the 1st Department; more information can be found HERE.

Francis D. McCurn was born in Westernmill, NY in 1889. He was educated at Rome Free Academy and the Syracuse College of Law, where he received his degree. Afterward, he was a clerk in the offices of Bond, Schoenck & King and later White & Shinamen, and was admitted to the bar in 1915.

For twenty-one years McCurn was an associate or partner in a succession of firms, as well as an active politician within the Democratic Party, running unsuccessfully for Mayor of Syracuse at one point. His first appointment to the bench came on January 23, 1934, when he was designated a Justice of the Supreme Court for the Fifth District. He was not re-elected in the subsequent election. He was appointed to the same Court again on November 4, 1937, this time being reconfirmed by election the following year.

As a trial judge, McCurn was dispatched to New York City in 1938 and 1939 to preside over an extraordinary term of the Supreme Court engaged in investigating the municipal police. Following this episode, he was appointed to the Appellate Division of the Fourth Department on January 4, 1940. He was elevated to Presiding Justice on September 16, 1953 following the death of Marsh Taylor. Mandatorily retired at the close of 1959, he had sat for twenty consecutive years as an Appellate Judge which was a record in the Department up to that time.

After his retirement, McCurn joined a local practice, also teaching part-time at the Syracuse College of Law for five years (1960-65). His voluntary actions included service as a Trustee of the St. Thomas More Chapel, a Trustee of Catholic Charities of Syracuse, and a Trustee and Chairman of the State College of Forestry. He died in Syracuse in 1971.