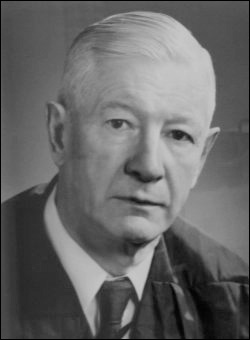 Justice McCurn also sat on the bench of the 4th Department; more information can be found HERE.

Francis D. McCurn was born in Westernmill, New York on September 17, 1889. He was educated at the Rome Free Academy and received his law degree from the Syracuse College of Law. Admission to the Bar followed in 1915. He practiced law in Syracuse and ran unsuccessfully for Mayor of Syracuse in 1931 and 1935. In 1934 he was appointed to the Supreme Court, 5th Judicial District, but lost the subsequent election to the bench. Reappointment followed in 1937, and he was elected in 1938.

In that same year, Justice McCurn was designated by Governor Lehman to preside over an extraordinary term of the Supreme Court to handle matters growing out of a far-reaching investigation into official corruption downstate in Brooklyn. Prior to this, McCurn had not presided over a criminal trial. Here, though, he found himself supervising such highly publicized cases as that in which a blue ribbon jury acquitted Kings County Judge George W. Martin of bribery charges in an abortion racket. In another, an Assistant District Attorney was acquitted of bribery in a fur racket. Another Assistant District Attorney pleaded guilty to accepting money to fix criminal cases, and the City Magistrate was removed in connection with a bail-bond racket. In all, 61 people were indicted in the investigation’s first year.

Following Justice McCurn’s retirement from the bench in 1959, he returned to practice in Syracuse and taught part-time at Syracuse University. He passed away on September 16, 1971, a day before his 82nd birthday.