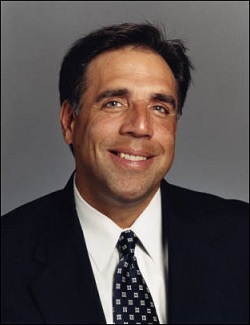 Christopher J. Burns was elected to the New York State Supreme Court in the Eighth Judicial District in November 1995 and began his term in January of 1996. On December 28, 2000 he was appointed as an Associate Justice of the Supreme Court Appellate Division, Fourth Department, by Governor George Pataki. Prior to being elected to the Supreme Court, he served as an Assistant Erie County District Attorney from 1979-83. Justice Burns was elected as a Town Justice in the Town of Tonawanda in 1983, where he served for 12 years. During that time, he also maintained a private practice in Kenmore with the firm of Hawthorne, Markarian, Siegel, Manz and Burns. Justice Burns received his Juris Doctor degree from the State University of New York at Buffalo Law School and was admitted to practice in 1980. In addition to his duties in the judiciary, Justice Burns is also an occasional speaker at area schools and community organizations. He is a former member of the faculty of the New York State Office of Court Administration Training Program for Town and Village Justices and has been a guest lecturer in criminal justice classes at Canisius College, as well as a member of the adjunct faculty at Medaille College as an instructor in the Criminal Justice Program. Justice Burns is a member of the New York State and Erie County Bar Associations, the Association of Justices of the Supreme Court of the State of New York, Past- President of the Eighth Judicial District Supreme Court Justices Association and is also on the Board of Directors of the U.B. Law Alumni Association. He is also a member of the Judges and Police Conference of Erie County, Inc. and was the 1998 recipient of the Conferences’ Jurist of the Year Award. In July 2003, Justice Burns returned to the trial bench of the Supreme Court in the Eighth Judicial District, Buffalo, New York.