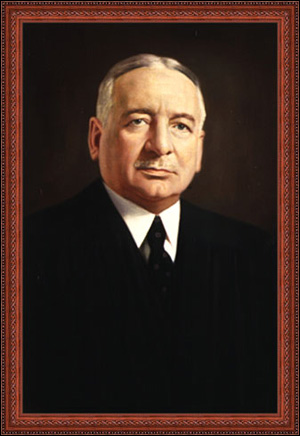 A child of pioneer lineage, Judge Harlan Rippey was raised in an austere and frugal environment typical of a devout Scotch-Presbyterian family of the time. Well before his election to the Court of Appeals, he had achieved an illustrious legal and political career, earning the respect of his colleagues on the bench and bar. As Court of Appeals Judge Marvin R. Dye put it, “Judge Rippey possessed a strong and rugged character which never permitted him to compromise his principles in order that the expedient thing might be done. This forthright and sturdy philosophy, coupled with an unquenchable zeal and untiring habits of industry, stood him well, and he became one of the truly great leaders of his generation.”1

Harlan Watson Rippey was born on September 8, 1874 in Greigsville, a small town located in Livingston County, New York, the son of Joseph Nelson Rippey and Hester Lynd Rippey. As a youth, Rippey learned the rewards of hard work and physical labor, walking or driving five miles to school every day and working on farms in the summer. After finishing his classical course of study at Geneseo Normal School in 1894, he went to the University of Rochester where he graduated with a Bachelor of Arts degree in 1898. Rippey worked his way through college by tutoring, selling advertising, and by working nights in the mail room of the Democrat and Chronicle, and later as a reporter for the Post-Express. He also taught mathematics as a professor at Wagner College from 1898-1899 while simultaneously earning his Master of Arts degree from the University of Rochester. Upon graduation, Rippey decided to study law and entered the office of George Raines, who acted as his preceptor. He was admitted to the bar in 1901.

He worked in Raines’s office until 1908, when he began his own practice. On June 30 of that year, he married Harriet Catharine Smith. As an attorney, Rippey handled more than 2,500 motions and appeals, and conducted over 500 trials.2 He quickly earned a reputation for being a skillful and resourceful trial lawyer who was always thoroughly prepared, and his extensive law practice took him to courts from Chicago to Boston.

In 1913, Rippey began an active political life when he was appointed as the Monroe County Inheritance Tax Appraiser. He worked in that post until 1915 and later served as the Inheritance Tax Attorney for the county. Rippey was active in the Democratic Party for a number of years prior to 1918, when he was named the chairman of the Monroe County Democratic committee. He remained the head of the Democratic Party in Monroe County, either in name or in fact, until 1934. During that time, he was said to have “attained greater prominence than any man who ever held the leadership [in Monroe County].”3 A strong supporter of Franklin Delano Roosevelt, he served as a presidential elector in the 1932 election and a delegate to numerous state and national conventions. From 1930-1934, Rippey also served as Liquidation Attorney for the New York State Superintendent of Banks and U.S. Comptroller of the Currency, as well as a member of the Mastick Commission to reform the state’s tax laws.4

Rippey embarked on his distinguished judicial career in 1927. In March of that year, upon the creation of an additional judgeship in Supreme Court for the Seventh Judicial District, Governor Alfred E. Smith appointed him to that seat until elections could take place later that year to select a permanent Justice. Tellingly, he had the recommendation of eight Supreme Court Justices, all but one of which was a Republican, as well as the bipartisan support of numerous leaders of both parties. In fact, he was the first Democrat named to the Seventh Judicial District bench in 44 years. During his brief nine-month tenure as Supreme Court Justice (he retired in December 1927), he disposed of an unusually high number of cases without break and earned the praise of many leading attorneys.

President Roosevelt appointed him to the federal bench in 1934 as a United States District Court Judge for the Western District of New York to fill a vacancy caused by the death of Judge Simon L. Adler. Judge Rippey typically stayed in his office until late at night, often bringing work home with him to do into the early hours of the morning. He was known as “the man who doesn’t know how to take a vacation.”5 In contrast to other judges who might seek more time to work on their decisions, Judge Rippey was more than willing to take additional cases. He served as a federal judge for two years, before retiring in 1936 to serve on the New York Court of Appeals.

In November 1936, Judge Rippey was elected to the Court of Appeals in a landslide victory over Republican candidate James P. Hill. When he first took the bench, he was described as a man with “bright, twinkling eyes and a firm handclasp” who had a “determination to see that justice is seasoned with mercy and understanding.”6 Judge Rippey was a delegate-at-large to the 1938 Constitutional Convention7 and served on the Court until 1944, when he reached the mandatory retirement age of 70. He died on March 11, 1946, and is buried at Mt. Hope Cemetery in Rochester, New York. Upon his death, he was remembered this way:

His period of service on this court was short in years but long enough to impress upon his associates and members of the Bar his sturdy character, his ability and legal scholarship. He performed his work with meticulous care and, aided by a rather unusual intuition, he quickly arrived at the essence of the controversy in a difficult case and proceeded to its decision with painstaking and convincing logic. . . . He had an unswerving zeal for doing what he considered the right and just thing and, even though such attitude might, and at times did, take him from the conventional course of his fellow men, opposition did not lessen his conviction or dull his enthusiasm. Whether in agreement or dissent one was obliged to recognize his sincere and forthright character, compelling as it did, and as such conduct always must, among reasonable and discerning men, a wholesome respect and admiration.8

Judge Rippey left a widow, the former Harriet Catharine Smith, and was survived by a son, Joseph Smith Rippey, a lawyer who died childless in 2002 at 92 years of age.9 He also left two daughters, Mrs. Catharine Adele Rippey and Harriet Bertine Eisenberg, who died on October 18, 1990 leaving her husband Richard F. Eisenberg of Monroe County, who taught engineering at the University of Rochester. None of Judge Rippey’s children had offspring.

The Depression and Reform: FDR’s Search for Tax Revision in New York .

The author has been unable to identify any published books or articles by Judge Rippey.