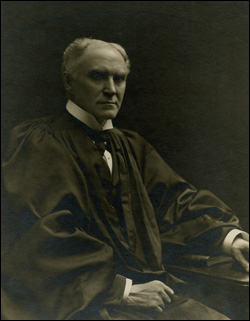 Peter B. McLennan was born December 3, 1850 in Lyndon, Cattaraugus County, New York. He was one of six children, the son of a journeyman stone cutter. His parents were immigrants from Scotland who had taken up subsistence farming at the Scotch immigrant settlement in Lyndon. In addition to duties at home, he worked as a farm laborer to his neighbors as a youngster, and acquired a reputation as something of an agronomical and breeding advisor. By the age of sixteen, he had obtained a job as a schoolteacher though, oddly enough, he had only ever attended school in the winter months. He managed through savings and part-time employment to put himself through Alfred University from which he was graduated cum laude in 1873. For a period in 1873 he was a schoolteacher in what is now Solvay, NY. He was then hired as Managing Clerk for the firm of Fuller & Vann in Syracuse, where he studied the law. He was admitted to the bar in Rochester on October 6, 1876.

Beginning that year, he was a partner in a succession of firms until he was hired as General Counsel to the West Shore Railroad, a position he held until the firm was re-organized under foreclosure in 1885. From 1885 to 1892, he was again in private practice in a partnership.

McLennan was a Republican party member, “an uncompromising partisan and dedicated factionist”, in the words of eulogist. This served him in acquiring a nomination to the State Supreme Court for the Fifth District to which he was elected in 1892, and re-elected in 1906. He was appointed to the Appellate Division of the Fourth Department in January of 1898 and elevated to Presiding Justice six years later, which post he held until his death in Rochester on May 8, 1913.