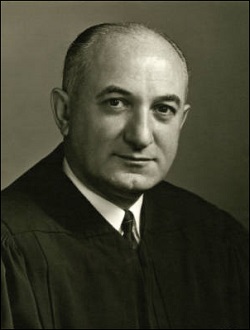 Frank DelVecchio was born in Syracuse on February 24, 1903. He was a graduate of the Syracuse University College of Law and was admitted to practice in 1932. He practiced law in Syracuse until 1954 when he was appointed as District Attorney for Onondaga County. He was elected to the Supreme Court in 1955 and in 1962 was designated as the Administrative Trial Judge for the Fifth Judicial District. In 1963 he was designated by Governor Rockefeller to the Appellate Division, Fourth Department. He retired from the Court in 1975 and died on September 7, 1980.