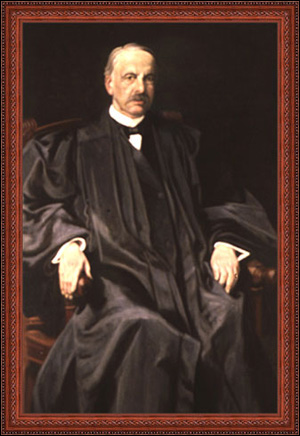 In Alden Chester’s 1925 work, Courts and Lawyers of New York: A History, Chester states that Judge Albert Haight’s length of service as a jurist had not been exceeded by any other judge in Erie County. Given Haight’s remarkably long service as a New York state judge-starting at the age of 30 as a Supreme Court Justice, continuing to the mandatory retirement age of age 70 on the Court of Appeals, and continuing still as an official judicial referee until his death at age 84: Haight possibly holds the length of continuous service record for any Judge throughout New York State to this day.

On February 20, 1842, Albert Haight was born in Ellicottville, Cattaraugus County, New York. His parents, Henry Haight and Sarah Sisson Haight were farmers near Aurora and then West Falls, Erie County, New York. As a boy, Haight worked on the family farm and attended public country schools. At the age of 16, he attended the Springville Academy. In 1861, at the age of 20, he moved to Buffalo and studied law with the office of Messrs. Sawin & Lockwood and then with Edward Stevens.

In 1863, at the age of 21, he was admitted to practice and opened an office in Buffalo. He practiced law for nine years. In 1864, Haight married Angeline Waters of Aurora, New York.

Haight was a lifelong Republican, and, in 1872, at the age of 30, he was elected on that ticket to the office of Erie County Judge. He was the youngest man who had ever held that office. A year before his term expired, in 1876, he was elected Justice of the Supreme Court to a 14-year term. In 1884, Governor Grover Cleveland appointed Haight as an Associate Justice of the General Term, Fifth Department.

Most famously, Haight presided over what became known as the Standard Oil Conspiracy case. Following a series of small explosions at the Buffalo Lubricating Oil Company, employees of the Standard Oil Company were charged with criminal conspiracy to injure trade and arson. The general charge was that these Standard Oil defendants induced one of Buffalo Oil’s employees-Albert A. Miller: to ruin Buffalo Oil’s business by sabotaging its equipment. Miller apparently was not tried for any crime.

At trial, Miller testified that the Standard Oil defendants advised him on how to cripple Buffalo Oil. Employees of Buffalo Oil testified that, on the day that the first run of oil was made there were two explosions that blew a safety valve off, freeing a vapor that luckily did not ignite. Miller was not at the company when the explosions occurred, but had built the fires under the boilers. Employees testified that they had never seen fires so hot, and they regarded the fires as dangerous. Miller, however, had directed that the employees put more coal on the fires, and even may have thrown in some coal himself.

At the close of the People’s case, Judge Haight ordered some of the Standard Oil defendants acquitted. In charging the jury as to the remaining Standard Oil defendants, Judge Haight “passed over the broad charge of conspiracy to ruin the Buffalo Company, and said that the attempt to blow up the works was ‘the chief inquiry in the case.'”1 The jury found the remaining defendants guilty as charged in the indictment. At sentencing, Judge Haight directed these defendants to pay a fine of $250 each. As editorialized by the New York Times, “[m]uch indignation was the result of this farcical administration of justice.”2 During Judge Haight’s subsequent designation and election to the Court of Appeals, the press raised his involvement in the Standard Oil case.

In 1894, Judge Haight was elected to the Court of Appeals for an eight-year term. He was reelected in 1908, and served until 1912, when he reached the mandatory retirement age of 70 years old.

Judge Haight wrote 621 Court of Appeals opinions and 71 dissenting opinions. An interesting early Judge Haight opinion is Quinlen v. Welch (69 Hun 584 [1893]). In that case, the Court interpreted the 1873 Civil Damage Act, which provided a right of action to every husband, wife or child who is injured in person or property or by means of support by any intoxicated person or by any person selling or giving away intoxicating liquors or renting a building having knowledge that intoxicating liquors are sold therein. The defendant in the case was the owner of premises where intoxicating drinks were sold to Dennis Quinlen, who became intoxicated, wandered onto a railroad track, and was struck and killed by a train. The plaintiff was Quinlen’s daughter: who was born one day after her father’s death. Carefully citing Blackstone and a wealth of historical and contemporaneous precedent, Judge Haight wrote that the child could maintain the action, holding that “[a]n unborn child, if subsequently born alive, if deprived of a parent, suffers damage in its means of support equally with the children that were living at the time of the decease of such parent” (id.).

One of Judge Haight’s most-often cited opinions is from his later years on the Court. People ex rel. Lodes v. Department of Health of the City of New York (189 NY 187 [1907]) involved George Lodes’s application for a preemptory writ of mandamus to compel the Board of Health to rescind its action revoking his permits to sell and deliver milk from wagons and from his store in Brooklyn. The Board of Health revoked the permits without notice to Lodes, and opposed the writ based on Lodes’s four prior convictions for selling adulterated milk. Based on a thoroughly reasoned majority opinion by Judge Haight, the Court held that Lodes was not entitled to a preemptory writ. Judge Haight carefully concluded that Lodes did not have a property interest in the permits because the permits were a license and, as such, could be revoked without notice on the basis of a public health violation. The Judge also wrote that the Board members were administrative, not judicial, officers and thus, a writ of mandamus may lie only if “their action is arbitrary, tyrannical and unreasonable, or is based upon false information.” (id. at 194). As evidenced by Lodes, Judge Haight was at the forefront of developing the arbitrary and capricious standard of review in the administrative law context.

Judge Haight was described as “modest and unassuming to his own attainments” and as a jurist who was “‘[s]low to judgment, seeks the truth, is just, and sure.'”4 He was known for his reserved personality and slow manner of speech: another Buffalo judge noted that when Judge Haight spoke “‘even in ordinary conversation, he seemed to weigh his words, as if he were handing down an opinion.'”5 The Judge was also described as an “example of intellectuality, civic spirit, character, learning and achievement” with his career presenting “a noble ensemble of vigor, consistency and high-minded purposefulness.”6 Chief Judge Cullen memorialized Judge Haight’s true fondness of his fellow Judges and affection for his colleagues in Buffalo by quipping, “‘He has not known love who has not known Haight.'”7

After his retirement, Judge Haight became an official referee of the Court of Appeals, maintaining an office in the Prudential Building in Buffalo, New York. He was also an active member of the Erie County Bar Association, the New York State Bar Association, the Buffalo Club, and the Lawyers’ Club.

It was Judge Haight’s fortune to begin his work on the bench when a young man and to continue his labor without interruption to extreme old age. But we count not achievement by figures on a dial. Kind nature and political favor might combine to create a career noteworthy only for length. For Judge Haight they did more. They gave him an opportunity for distinction as a jurist which he seized with earnestness. How honorably and successfully he made use of it the report of Hun and of this court attest. In patience, he rivaled Job. In diligence, he had that infinite capacity for taking pains that some call genius. Conscientious to the last degree he counted his work unfinished until the last page of the record had been read, the last authority had been examined and the last word in consultation had been said. With him ‘discretion of speech’ was ‘more than eloquence;’ a case in point better than the apt turning of a phrase. As a rule he kept near the shore of legal tradition and cared not to embark on the uncertain ocean of sociological and philosophic jurisprudence. . . . In the tribute to the judge we do not forget the man. For his colleagues and for the member of the bar his affection was deep and lasting. . . . A brother judge was to him a brother indeed; a lawyer, one of the chosen people. He will be missed from the gatherings of the bar, both sad and social, where his dignified and typically judicial figure had become so familiar. But his name will live in memory as that of a great jurist whose warmth of heart a somewhat solemn and taciturn exterior sometimes concealed but never chilled.8

We know of no published writings of Judge Haight beyond his written decisions.