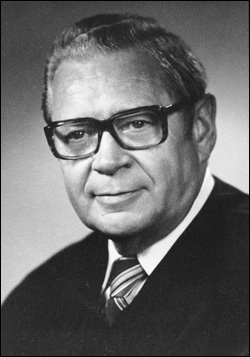 Presiding Justice Harold E. Koreman was born in Albany on June 12, 1916. He attended Holy Cross Academy and Christian Brothers Academy, in Albany, and was graduated from Holy Cross College in Worcester, Massachusetts, in 1937, and from Albany Law School in 1940. He was admitted to the New York State Bar in 1940. From 1941 to 1946, he was employed as a special agent of the Federal Bureau of Investigation (FBI). Then he served as an Albany County assistant district attorney (1947 to 1953); Director of Enforcement of the Office of Price Stabilization (1952 to 1953, while on leave from the District Attorney’s office); and City of Albany Corporation Counsel (1954 to 1957). From March 1946, Presiding Justice Koreman also was in private practice until his election as Surrogate of Albany County in November 1957. He was elected a Supreme Court Justice for the Third Judicial District in 1963. He served as Administrative Judge of the Third Judicial District from January 1972 to August 1975 by appointment of the Appellate Division, Third Department. Gov. Carey designated him to the Appellate Division, Third Department, on August 19, 1975, and then appointed him Presiding Justice on December 31, 1975. He served as Presiding Justice for two years, until his term as a Supreme Court Justice expired. He was appointed a judge of the Court of Claims by Gov. Carey on January 4, 1978, for a term to expire January 22, 1986. Gov. Carey appointed him Presiding Judge of the Court of Claims at the end of 1979. Judge Koreman died in 2001.