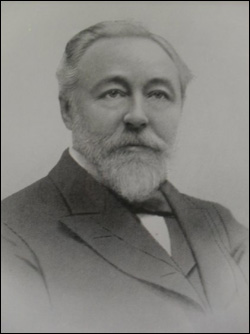 It was said that Justice George C. Barrett “was undoubtedly one of the greatest Judges that ever sat upon the bench. He was learned in the law and a man well versed in the literature of the day.” He was “famous for the extreme lucidity of his opinions and the perfect courtesy and dignity of his demeanor.” (New York Times, June 8, 1906.)

Born July 28, 1838 in Dublin, the son of a clergyman, Barrett later emigrated to Canada and was educated in London, Ontario. He then attended Columbia University, from which he did not graduate, but left to study law in the office of Van Cott, Cady & Smales in New York City.

At age 25, Barrett was elected Justice of the 6th Judicial District in 1863 and 4 years later was elected Judge of the Court of Common Pleas, filling a vacancy. In 1869 he returned to private practice. It was then that, as president of the Young Men’s Municipal Reform Association, Justice Barrett concentrated on the movement to break up the Tweed ring.

In 1871 Justice Barrett was nominated by the Apollo Hall Democrats as a Supreme Court Justice, which nomination was endorsed by both wings of the Republican party. Barrett won the election, defeating the Tammany Hall candidate. While on the bench, Barrett was known as a fair-minded judge, and he presided over many notable cases, both civil and criminal.

Upon the formation of the Appellate Division First Department, Barrett was designated as an Associate Justice in 1896. During his term he set out to improve jury laws. A bill drawn by him and others to secure juries more readily in notable criminal trials was introduced in the Legislature in January 1896.

In January of 1900, although Justice Barrett was redesignated by Governor Roosevelt for an additional 5 years on the Appellate Division bench, he asked to be transferred back to the Supreme Court bench, from which he retired in 1906.

Justice Barrett passed away on June 7, 1906, having suffered from tuberculosis for a number of years.