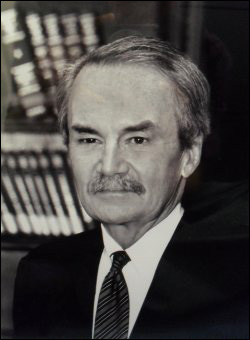 Justice Kavanagh also sat on the bench of the 3rd Department; more information is available HERE.

E. Michael Kavanagh was born on September 26, 1943, in Lawrence, New York. He graduated from Merrimack College in North Andover, Massachusetts, and received his law degree from Villanova University School of Law in 1968. After graduation, he became an associate at Munley & Meade, in Great Neck, New York, followed by service in the U.S. Army from 1968 to 1970.

From 1979 to 1984, Justice Kavanagh was an adjunct professor at the State University of New York at New Paltz. In 1986, he ran unsuccessfully on the Republican ticket for Lieutenant Governor of New York. Six years later, he was nominated by President George H.W. Bush to be a Federal judge, but the U.S. Senate never acted on the nomination.

Justice Kavanagh was elected to the Supreme Court, 3rd Judicial District, in 1998. In 2006, Governor Pataki appointed him to the Appellate Division, First Department, where he remained until 2008, when Governor Spitzer then appointed him to the Appellate Division, Third Department. He remained on that bench until 2012, at which time he lost his bid for reelection to the Supreme Court. The following year, Justice Kavanagh joined NAM (National Arbitration and Mediation) as a neutral.

Justice Kavanagh is married to Marilyn Ryan Kavanagh; they have two children and live in Woodstock, New York.