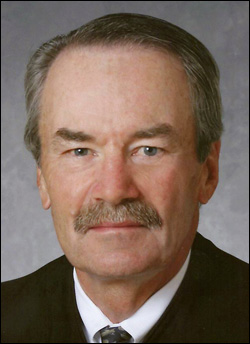 Justice Kavanagh also sat on the bench of the 1st Department; more information can be found HERE.

Justice E. Michael Kavanagh was appointed to the Appellate Division, Third Department, on February 5, 2008. He graduated from Merrimack College in 1965 and from Villanova University School of Law in 1968. He served in the United States Army from 1968 to 1970 and was honorably discharged. He was admitted to the practice of law in 1970. Justice Kavanagh began his legal career in private practice with Munley & Meed in Great Neck, New York, in 1968. He served as an Assistant District Attorney in the New York County District Attorney’s Office (1970 to 1974) and then as Chief Assistant District Attorney at the Ulster County District Attorney’s Office (1974 to 1978). He was elected Ulster County District Attorney in 1978 and re-elected six times; he served until December 1998. He was elected Supreme Court Justice for the Third District in 1998. Justice Kavanagh was appointed to the Appellate Division, First Department, on November 17, 2006. He has served as representative of the Third Judicial District to the New York State Litigation Coordination Panel since 2005. He has also served as a member of the Advisory Committee on Judicial Ethics since his appointment in 2005 by the Chief Administrative Judge.