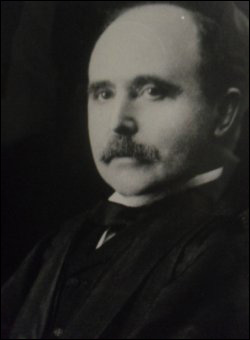 Justice Hatch also sat on the bench of the 2nd Department; more information can be found HERE.

Edward W. Hatch was born in Friendship, New York on November 26, 1852. He came from a poor family and as a young man worked as a blacksmith to earn enough to study law.

He was admitted to the Bar in Buffalo in 1876 and was elected District Attorney of Erie County four years later. He was active in politics as a member of the Republican State Committee and Chairman of the Republican Committee of the 8th Judicial District. He resigned those positions and retired from politics, however, when he was elected judge of the Superior Court of Buffalo in 1886. In 1895 he was elected to the Supreme Court bench of the 8th Judicial District and was appointed by Governor Morton to the Appellate Division Second Department just one year later. He was transferred to the First Department by Governor Roosevelt in 1900.

In 1903, Justice Hatch and Justice Woodward met with representatives of the bar of the 5th Judicial District to discuss the lack of judicial representation in the 8th Judicial District and the call for the resignation of these two justices from the Appellate Division to return to the trial courts in Erie County. Brought up in the discussion was the fact that assignments to the Appellate Division were allegedly being made purely for political reward. Justice Hatch spoke sternly, “. . . In other words, this Appellate Division has been broken into with a crowbar. And having been successfully burglarized you ask that Judge Woodward and myself should be made the victims of that situation. That is the situation that confronts you.” (Justices Declare the Judiciary Debauched; Judges Hatch and Woodward Attack Executive Assignments, N.Y. Times, Jan. 4, 1903, at 1.) The committee then passed a resolution stating that assignments to the Appellate Divisions be made by the judicial authorities. A committee was appointed to appeal to the judges of the 4th Judicial Department for a distribution of justices to Erie County.