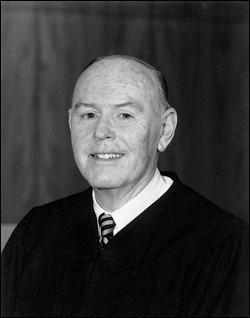 Justice James N. White was appointed to the Third Department on September 8, 1993. A resident of Amsterdam, he had served as a Justice of the Supreme Court since 1985. He was designated as the Administrative Judge of the Fourth Judicial District in January 1992. From 1972 until 1984, Justice White was the Montgomery County Judge, having initially been appointed and subsequently twice elected. In addition to his judicial career, Justice White was the part-time Assistant District Attorney for Montgomery County for seven years and then served as Montgomery County District Attorney from 1965 to 1972. He was a general private practitioner in Rochester and then in Amsterdam, and is a graduate of the University of Pennsylvania and Harvard Law School. He retired from the Third Department in 1998.