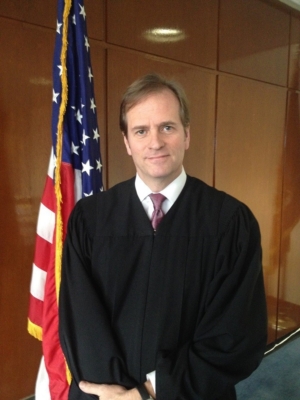 From March 2015 to June 2017, the Honorable Peter H. Moulton was the Administrative Judge of Supreme Court, Civil Branch, New York County. During that period he served simultaneously as the Coordinating Justice for the New York City Asbestos Litigation.

Justice Moulton received his B.A. from Stanford University in International Relations and his J.D. from Columbia University School of Law. At Columbia, he served as managing editor of the Columbia Human Rights Law Review, where he helped edit the second edition of A Jailhouse Lawyer’s Manual.

Justice Moulton began his judicial service in 2004, when he became a Judge of the Civil Court in New York County. He was the Supervising Judge of that court from November 2010 to January 2014.

In June 2017, the Governor appointed Justice Moulton an Associate Justice of the Appellate Division, First Department.

In 2015, soon after taking over as Administrative Judge, Justice Moulton introduced the Judicial Mediation Part (Part J-Med). This Part was created to bring a judicial focus to bear on the settlement of post-note cases. The Administrative Coordinating Part (Part 40, or 40 TR as it is now) was intended as a Part that would efficiently, and without delays or postponements, and while avoiding a backlog of matters in the Part, assign trial-ready cases to Parts for trial. In order not to interfere with that process and yet to bring additional attention to the task of settlement, Part J-Med was created.

Here a Justice would make efforts to settle post-note cases. Prior to that time, the court undertook settlement efforts through the work of staff-attorney Neutral Evaluators (this program was informally referred to as “Mediation”), but there was no special Part for judicial settlement efforts. Justice Moulton assigned Judicial Hearing Officer William Leibovitz to preside over Part 40.

Justice Moulton worked to promote alternative dispute resolution in commercial cases. Our court has long operated the Alternative Dispute Resolution Program for Commercial Division cases. Justice Moulton, in conformity with applicable rules, designated certain Justices not assigned to the Division to refer commercial cases to the ADR Program so that the Program could bring its benefits to a greater number of cases.

Justice Moulton continued an experiment introduced in June 2014 whereby every fifth newly- filed Commercial Division case was referred to the ADR Program for mediation. This pilot program, which was to run for 18 months, was undertaken at the suggestion of the Chief Judge’s Task Force on Commercial Litigation in the 21st Century in its Report and Recommendations of June 2012. Having studied the results of the Pilot Project after more than a year and one-half of its operation, Justice Moulton decided that the Project should not be extended beyond its term, which ended in February 2016.

After consultations with interested Bar groups, and taking into account the lessons learned in the foregoing experiment, a pilot project of a different design was introduced in April 2017 by Justice Moulton. Under this program, certain commercial cases not assigned to the Commercial Division are automatically referred to mandatory mediation in the ADR Program. These cases initially were those in which the filer of the RJI designated the matter as a “Contract” case on the RJI and sought a preliminary conference. All such matters were referred promptly after filing of the RJI to a centralized Part, where consideration would be given to the issuance of directives for discovery tailored to the mediation process. Thereafter, the cases would promptly proceed to mediation. All proceedings in the case other than this initial conference would be handled by the assigned Justice.

The results of this project were encouraging. So, in 2019, the cases covered by the program were expanded to other types of commercial cases in which a preliminary conference was being sought at the filing of the RJI.

Justice Moulton put in place a process for certifying the roster of mediators in the Commercial Division ADR Program. Section 146.3 of Part 146 of the Rules of the Chief Administrative Judge calls for re-designation of mediators to the roster.

Justice Moulton has trained new judges and court personnel on an array of topics, including Judicial Discipline, Mediation, Foreclosure, No Fault Insurance, Motion Practice in Civil Court, and Small Claims Court. In 2013, while Supervising Judge of Civil Court, Justice Moulton, in partnership with the Judicial Institute, helped organize and present a three-part program for judges, court personnel, and practitioners entitled “Transgender Litigants in the Court System: Providing Equal Access and Impartial Justice.” In 2000-2001, he facilitated a series of workshops on domestic violence for incarcerated women and adolescents at the Rose M. Singer Facility on Rikers Island. The workshops included step-by-step instructions on how to obtain an order of protection as an unrepresented person against an abusive partner.

Justice Moulton has been active in bar association activities. Among other things, he served as a member and Chair (2008-2011) of the City Bar Association’s Committee to Encourage Judicial Service, and also was a member of the Civil Rights and Administrative Law committees at the City Bar.