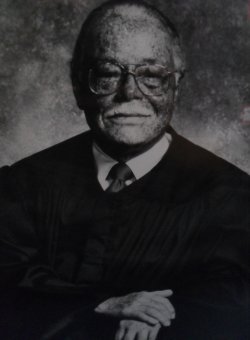 While attending DuSable High School on the South Side of Chicago in the 1930s, Herbert B. Evans decided that he wanted to become a lawyer to “eliminate discrimination in housing.” He was appalled that low-cost housing in the area was segregated. During his career, he had the opportunity to put his thoughts about housing into action, serving as Chairman of the New York City Housing and Redevelopment Board.

Herbert Bernette Evans was born on December 12, 1919, in Kansas City, Missouri, and raised in Chicago. After graduating from DuSable High School, he and his family moved to Harlem. He attended Howard University in Washington, D.C., while working for the Department of War, but the outbreak of World War II interrupted his education. He served in the Army for three years and returned to attend St. John’s Law School, where he graduated second in his class in 1950.

Evans’s first job was staff lawyer for the civil division of the Legal Aid Society. Later, in 1955, he became a partner in the firm of Weaver, Evans, Wingate and Wright — all four name partners later becoming New York City judges. During this time, Justice Evans was becoming interested in politics. He became Assistant Counsel to Governor Averell Harriman, Commissioner of the New York State Parole Board, Assistant Counsel and legislative representative of the Housing and Redevelopment Board, and in 1961 was elected City Councilman for the 21st District in Harlem. Two years later, Mayor Robert F. Wagner appointed Evans a member of the Housing and Redevelopment Board. He eventually became its Chairman in early 1965.

Justice Evans was appointed to the Appellate Division First Department in 1977 by Governor Hugh Carey. He remained on that bench until 1979, at which time he was named Chief Administrative Judge of the state by New York’s Chief Judge Lawrence H. Cooke. In this capacity he was responsible for overseeing the work of 1,000 trial judges across the state and approximately 10,000 nonjudicial employees of the court system. Chief Judge Cooke described Justice Evans as a man of “unquestioned integrity, mental keenness and affability.” He would now be faced with the problem of court congestion and backlogs. Evans declared that “I’m interested in reducing the amount of time it takes to process cases before the courts. I want to move them from indictment to trial within six months.”

During his tenure as Chief Administrative Judge, Evans was a supporter of Chief Judge Cooke’s controversial plan which called for the temporary transfer of 242 judges to certain Supreme and County courts where there were severe delays and backlogs in civil and criminal cases. Although the program was successful and statistics showed an increase of 39 percent in the disposition of cases during the first month, many judges were unhappy with the program, claiming that the transfer, usually lasting about one month, resulted in personal hardship. One upstate judge sued the Office of Court Administration and won an initial favorable ruling in Supreme Court. Evans was a respondent in the case.

Justice Evans left the court system in 1983 to become a partner at the law firm of Shea & Gould.
He was very active in the Harlem community. Early on, he was Chairman of the Board of the Harlem Urban Development Corporation, which set out to redevelop the Harlem community. In 1989, Evans was on the development team chosen to build a huge international trade center in Harlem.

Among Evans’s accomplishments, he was a founder of 100 Black Men, an organization of leaders in the black community; a founder of Freedom National Bank; an original member of the IOLA Board (Interest on Lawyer Account Program), a state-enacted program to help provide civil legal services to the poor; and a member of the State Commission on Judicial Conduct, the agency responsible for disciplining judges. In 1989, Chief Judge Sol Wachtler named Evans to sit on a committee investigating legal services to the poor. The resulting report urged that practicing lawyers be required to devote at least 20 hours per year to public service. In 1992, Mayor David Dinkins appointed Evans to a five-member independent panel — later known as the Mollen Commission — responsible for investigating corruption within the New York City Police Department.

Justice Evans was married to Audrey Mendenhall Evans. They had no children. He died in Sarasota, Florida, on June 16, 2009, at age 89.