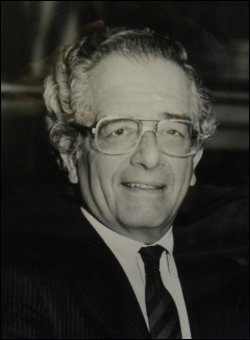 Born in 1927, Justice Wallach was raised in New York City and educated at the Fieldston School, where he was high school valedictorian in the Class of 1945. He earned his undergraduate degree at Harvard College, magna cum laude, Phi Beta Kappa, in 1949, and his LL.B. from Harvard Law School in 1952. After a brief stint as a reporter for the now-defunct Boston Post, he was in private practice — most recently with the firm of Lynton Klein Opton & Saslow — until his election to NYC Civil Court in 1969. In 1976 he was elected to Supreme Court, New York County, and was appointed to the Appellate Division, First Department, by Governor Mario Cuomo in January 1986. He died in office on June 1, 2003, seven months short of mandatory retirement.

Justice Wallach taught courses and delivered lectures at such law school venues as Fordham (where he was an adjunct professor), Harvard, Cornell, Hofstra, Emory, the University of Wyoming, the National College of the Judiciary in Reno, and Wadham College at Oxford. He was a lifelong devotee of Samuel Johnson, 18th century English literature, and law and literature in general, with many contributions to the New York Law Journal and other bar association journals. The style of his opinion writing was the subject of a feature article in the Fall/Winter 2000 issue of Cardozo Studies in Law and Literature.