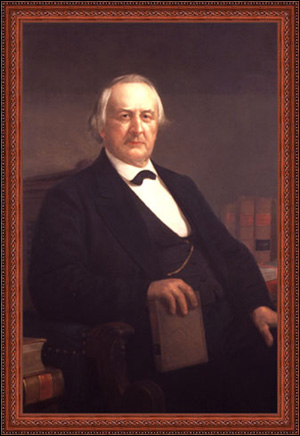 Although John A.1 Lott served as a constitutional member of the Court of Appeals for only six full months in 1870, he had a longer association with the Court, both as an ex officio member in 1861 and 1869 and as Chief Commissioner of the Commission on Appeals from 1870 to 1875. In these roles, he contributed 149 majority opinions to the New York Reports.

Lott was born in Flatbush, now part of Brooklyn, on February 11, 1806 as the only son of Abraham and Maria Lott. He traced his descent to Engelbert Lott, who, with his family, immigrated to New York from Holland in 1680 and moved to Flatbush two years later, in 1682. John’s great-grandfather, Johannis E. Lott, served as the first Surrogate of King County, assuming that office in 1787. He also sat as County Judge in 1793. John’s grandfather, Jeremiah Lott, assumed the Surrogate’s office in 1814.

Lott received his preliminary education at Flatbush Academy and attended Union College in Schenectady, from which he was graduated with honors in 1825. After graduating, Lott studied law in the offices of Henry E. Warner for three years, before beginning his practice in New York City. In 1829, he married his cousin, Catherine L. Lott. Lott returned to Brooklyn in 1835, entering into a partnership with Henry C. Murphy. The following year, Judge John Vanderbilt joined Lott’s and Murphy’s firm as a partner.

The law firm of Lott, Murphy & Vanderbilt gained statewide prominence. Its principals, all Democrats, controlled federal patronage in Brooklyn, including the Navy Yard (Murphy was Brooklyn’s mayor from 1842-1843). Democratic politicians regularly congregated at the firm’s offices, and, according to the New York Times, its partners “dictated all the local Democratic nominations and had great weight in the councils of the Democratic Party in the State” (Two Noted Jurists Dead, NY Times, July 21, 1878, at 12). Although Lott was, no doubt, steeped in Brooklyn political intrigue, his law partners, Murphy and Vanderbilt – if contemporary sources are to be credited – took to politics with an even greater avidity than he. Lott, meanwhile, “attended assiduously to the law business” (id.). The firm of Lott, Murphy & Vanderbilt survived for over two decades. After Murphy was appointed as United States Minister to the Hague, it became Lott & Vanderbilt.

In 1838, Governor William L. Marcy (1786-1867), a Democrat, appointed Lott as the first Judge of the Court of Common Pleas of Kings County. He sat on that bench until 1842. In 1842, he represented Kings County in the Assembly, and served a senior member of the Committee of Ways and Means and as chairman of the Judiciary Committee. In 1843, Lott joined the State Senate, where he served four years and chaired the Committee on Ways and Means. Lott was elected Justice of the Supreme Court for the Second Judicial District in 1857, to fill an unexpired term. Two years later, running unopposed, Lott won reelection as Justice of the Supreme Court, a position he held until December 1869.

Lott was appointed an ex officio Judge of the Court of Appeals in 1861 and again in 1869. He was elected in his own right as Associate Judge of the Court of Appeals on November 2, 1869. His most meaningful contributions – and his focus while on the Court – lie in the area of commercial law. Thus, in Justice v. Lang (42 NY 493 [1870]), he determined that a party that signed a contract was stopped from denying that the contract was validly executed under the statute of frauds, even when it was not signed by the party suing for performance. In Kunzze v. American Exchange Fire Ins Co. (41 NY 412 [1869]), Lott held that, when the insured transferred to a new building an insurance policy insuring goods against fire and damage, the goods remained insured even though they had not been moved to the new location. He reasoned that the fact that the insured “‘wanted the policy transferred to cover the goods in the new building,’ clearly shows that the object was to continue the insurance on them after their removal, and appears to me to repel the idea they should be uninsured, in the meantime, while remaining in the place they were in when first insured” (id. at 415). Although Lott’s writings often exhibit a sense of fair play, some of his opinions reveal a somewhat sterner side. In one of his few dissents, Lott objected to the Court’s holding that “the right of the traveler to recover of the carrier for lost baggage is not limited to such apparel or other articles as he expected to use” on the journey, but to other baggage as well (Dexter v. Syracuse, Binghamton and New York Railroad Co., 42 NY 326, 331 [1870]).

After leaving the bench, Lott remained active in public affairs. In 1875, Governor Samuel Tilden appointed him to a committee to draft uniform laws establishing “home rule” for municipalities throughout the State. Lott also became involved in the business world, as president of the Flatbush, Coney Island, Park and Concourse Railroad Company. In 1878, he oversaw that company’s merger with the Coney Island and East River Railroad Company and became president of the new entity, the Brooklyn, Flatbush and Coney Island Railroad Company. With a capitalization of $1 million, the new company undertook the construction of both a new railroad route to Coney Island and a luxury hotel on the island’s Concourse. Due to failing health, Lott submitted his resignation on June 4, 1878. By all accounts, he left the company’s finances in sound condition, with the new hotel and railroad nearing completion.

Shortly thereafter, on July 20, 1878, Lott collapsed and died in his Flatbush residence. His passing was unexpected: when he awoke that morning, Lott had a hearty breakfast, completed some business on behalf of the Flatbush Board of Improvement, of which he was president, and reported to his physician that he felt unusually well. He died suddenly around 10:00 a.m. Funeral services took place at the Reformed Dutch Church in Flatbush, and Lott’s remains were interred at the Green-Wood Cemetery in Brooklyn.

To date, we are not aware of any published writings by Judge Lott.