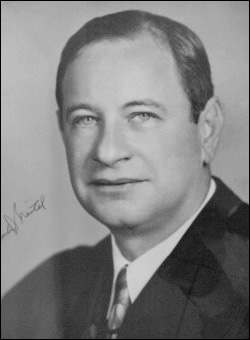 In 1967, Judge Breitel was elected to the Court of Appeals. See his full biography HERE.

Among the most noted accomplishments of Charles D. Breitel’s judicial career were elimination of the election of judges to the Court of Appeals and the requirement that the Court of Appeals sit as a “hot bench,” where each sitting judge becomes fully prepared by reading briefs and records on all cases before oral argument. As a result of the latter, presentations were shortened and discussions were stimulated on the points that the court found most significant. Regarding the election of Court of Appeals judges, new legislation was passed, and voters approved the required constitutional amendment in 1977 to replace popular elections with gubernatorial nominations, selected from a list furnished by the Commission on Judicial Nomination, with the governor’s choice subject to State Senate approval. In addition, Breitel appointed the first chief administrator of the state court system and supported constitutional amendments which created the central administration of the New York courts, as well as the Commission on Judicial Conduct.

Charles David Breitel was born in New York City on December 12, 1908. He attended public schools and earned a Bachelor’s degree from the University of Michigan in 1929. He received his law degree from Columbia Law School in 1932 and then went on to private practice.

Breitel worked with Thomas E. Dewey from 1934 to 1950, while Dewey went from New York City’s Special Rackets Prosecutor to Manhattan District Attorney, to private law practice, and then Governor of New York. Breitel was at his side, first as Assistant District Attorney in the Special Rackets Investigation Bureau, then as Chief of the Indictment Bureau, then as partner in the law firm of Dewey & Breitel, and finally as Counsel to the Governor.

In 1950 Governor Dewey appointed Breitel Supreme Court Justice and noted that he had “the finest legal mind in the state.” He was later elected and re-elected to that court. He was designated to the Appellate Division First Department in 1952, where he sat until 1966. It was during this time that Judge Breitel spearheaded the concept of a hot bench. In 1967 he was elected to the Court of Appeals and was elected its Chief Judge in 1973.

Among the notable opinions he wrote while on the Court of Appeals was one in 1972 which upheld the state’s liberalized abortion law of 1970. Another in 1975 held that indigent people wanting a divorce were not entitled to be represented by lawyers paid from public funds. Still another, in 1977, upheld a landmark designation for Grand Central Terminal, a ruling which was later reaffirmed by the United States Supreme Court.

Judge Breitel authored many essays and lectures, among which was “The Lawmakers,” the 22nd Annual Benjamin N. Cardozo Lecture Before the Association of the Bar of the City of New York, published by the Bar in 1965.

He retired at age 70 in 1978 and then became affiliated with the Manhattan law firm of Proskauer Rose Goetz & Mendelsohn until 1985.

Judge Breitel married Jeanne Hollander Breitel in 1927, with whom he had three daughters, one dying in infancy. He died on December 1, 1991 at age 82.

The Judges of the New York Court of Appeals, A Biographical History, Albert M. Rosenblatt [ed.], The Historical Society of the Courts of the State of New York, New York, 2007, pp. 685-693.