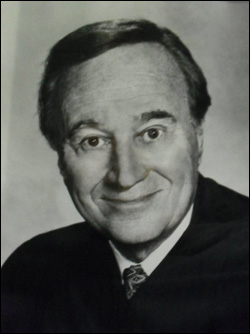 Justice Lerner also sat on the bench of the 2nd Department; more information can be found HERE.

Justice Alfred D. Lerner earned his reputation as an efficient administrator while acting as Administrative Judge of Queens County. He was successful in eliminating the backlog of cases and kept the dockets current. During Lerner’s tenure, Queens had become the only borough with no old cases left on its calendar. As a result, the Office of Court Administration, in 1994, brought him to New York City with a mandate to reduce the backlog of lawsuits pending against the City.

Alfred D. Lerner was born on September 19, 1928, in Jamaica, Queens. He enlisted in the U.S. Army at age 17. He graduated from Hunter College of the City University of New York and received his law degree in 1951 from New York Law School. After admission to the Bar, he went into private practice.

He was elected to the State Assembly as a Republican in 1957, where he spent the next 14 years representing three different Queens districts. While in Albany, Lerner served both as the ranking member of the Judiciary Committee and chairman of the Insurance Committee. In 1973, he was elected Supreme Court Justice, Queens County, and was named Administrative Judge of both the Civil and Criminal terms in Queens County in 1987. He spent the next 11 years whittling down calendar backlogs while earning a reputation for moving cases through the system.

In 1997, Justice Lerner was appointed by Governor George Pataki to the Appellate Division, Second Department. The following year, Pataki appointed him Presiding Justice of the Appellate Division, First Department, where he became the sole Republican on the 12-judge appellate bench. He remained P.J. until 1999, when he turned 70. Thereafter, he was recertified to the bench as Associate Justice and remained at the First Department until reaching mandatory retirement age in 2004. After leaving the bench, Justice Lerner joined the firm of Phillips Nizer LLP as Counsel. He still retained his seat on the Departmental Disciplinary Committee for the First Department. And, in June of 2005, Governor Pataki appointed him, once again, to another position, that of Chair of the New York State Commission of Investigation.

Early in his career, Justice Lerner had been an Adjunct Professor at St. John’s University Law School, lecturing on Uniform Commercial Code. He later earned an honorary Doctorate from Des Moines University in 1998.

Having earned his pilot’s license while serving in the Army, Justice Lerner retained that license over the years, serving in the Civil Air Patrol, having attained the rank of Colonel. The “Hon. Alfred D. Lerner Scholarship” was set up at New York Law School for law students who are U.S. veterans.

Justice Lerner was married to Charlotte Lerner. They had three children. He died on August 3, 2009, at the age of 80.