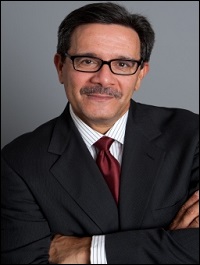 The Hon. Rolando T. Acosta was elected as a New York State Supreme Court Justice in New York County in 2002 and appointed by the governor in January 2008 to the Appellate Division, First Department. Prior to his election to the Supreme Court, Justice Acosta had been designated as an Acting Supreme Court Justice to preside over, and spearhead the creation of, The Harlem Community Justice Center, a multi-jurisdictional, “problem-solving” court. He was elected to a County-wide Civil Court judgeship in New York County in 1997.

Justice Acosta served as the President of the Latino Judges Association and was awarded the Association’s 2008 John Carro Award for Judicial Excellence “in recognition of his leadership and scholarly work as a New York State jurist and his work as a mentor and teacher with the Latino Community.” He was selected as the 2004 Judge of the Year by the National Hispanic Bar Association. Justice Acosta is currently a member of the New York State Commission on Judicial Conduct, the Chief Judge’s Task Force to Expand Access to Civil Legal Services in New York, the City Bar’s Council on the Profession, and a Fellow of the New York Bar Foundation. He was awarded the Jewish Lawyers’ Guild 2013 Golda Meir Memorial Award.

Justice Acosta has been active in the development of the Washington Heights/Inwood social service infrastructure. For example, he helped found the Latino Commission on AIDS and served as legal adviser to the founding board of Alianza Dominicana. He also served as treasurer and Chair of the Policy Committee of the Hispanic Federation. In 1995, he was appointed to serve as a founding board member of the Upper Manhattan Empowerment Zone (EZ). Justice Acosta served on the EZ’s Executive Committee and chaired its Human Capital Development Committee, which he led in considering and recommending to the EZ Board all human capital and quality of life proposals.

Justice Acosta was raised in the South Bronx and Washington Heights, after having immigrated from the Dominican Republic at the age of 14. Prior to his judicial service, he held various posts with the Legal Aid Society, including Attorney-in-Charge of the largest civil trial office and Director of Government. Justice Acosta has also served as Deputy Commissioner for Law Enforcement for the New York City Commission on Human Rights. In this role, he was responsible for directing all of the Commission’s investigatory and prosecutorial functions, including the planning and execution of litigation strategy.