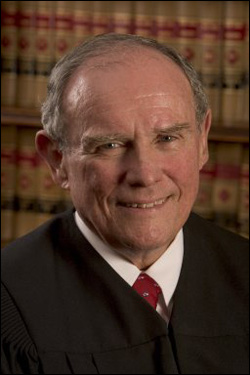 John T. Buckley was born in Utica, New York, on February 8, 1936. He graduated from Georgetown University in 1958, where he was elected Junior Class Secretary and Treasurer of the student body. He received his law degree from Albany Law School in 1961, where he was elected Class President each year. He attended both schools on scholarships. While in law school, Buckley clerked for the late State Senator Fred J. Rath. After graduation, he entered the U.S. Army Reserves and was later honorably discharged as Captain, JAGC.

Judge Buckley began his legal career in 1962, joining the firm of Kernan and Kernan in Utica. Six years later, he formed the two-lawyer firm, Buckley & Scholl, also in Utica. While in private practice, Judge Buckley was elected to the New York State Assembly from the 116th District, Oneida County, in 1966. He was elected to a total of 3 terms and did not seek a fourth, making an unsuccessful bid to win a Republican nomination to Congress.

Upon his election in 1979 as Judge of Oneida County Court, Buckley began his distinguished judicial career. He served on that bench until 1994, when he was elected a Justice of the Supreme Court, 5th Judicial District. Five years later, Governor George Pataki appointed Judge Buckley an Associate Justice of the Appellate Division, First Department.

In 2003, Governor Pataki called upon Buckley once again, this time naming him Presiding Justice of the Appellate Division, First Department. Once Justice Buckley reached the mandatory retirement age of 70 in 2006, he stepped down as P.J. and, while still retaining his seat on the bench as an Associate Justice, he became the new head of appellate education at the Judicial Institute in White Plains. In that capacity, he assisted in the development of research and training programs for judicial staff on appellate practice and the operations of appellate courts.

Justice Buckley is married and has two children.