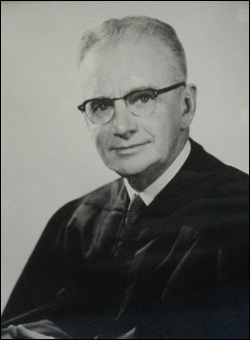 Born in 1905, Daniel E. Macken received his law degree from Syracuse University Law School in 1928. He was in private practice in Rochester and was on the Monroe County Board of Supervisors. In that capacity, he was Chairman of the Special Citizens’ Committee on Social Welfare, a group which studied the public welfare program in Monroe County and made recommendations to the Board.

Justice Macken was elected to the Supreme Court, 7th Judicial District, in 1960, and was designated to the Appellate Division First Department in 1968 by Governor Rockefeller. He remained there until 1975, when he reached mandatory retirement age.

Macken was married to Mary Frances Macken, with whom he had two children. Justice Macken died on September 7, 1989, at the age of 84.