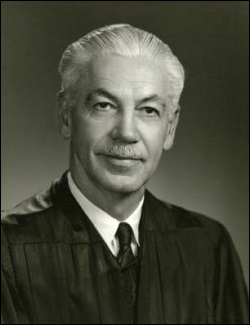 John S. Marsh was born on March 6, 1908 in the Bronx and later moved to Niagara Falls with his family. He graduated from Albany Law School and was admitted to practice on January 14, 1932. He practiced law in Niagara Falls until 1939 when he was appointed Niagara County District Attorney. In 1948 he was appointed as Niagara County Judge and presided over the Children’s and Surrogate’s Court as well as the Criminal Court. In 1953, he was elected to the State Supreme Court. During the 1960’s he was appointed by Governor Harriman to preside over a series of trials of reputed organized crime figures in Utica, which became known as “Sin City” during the investigation that resulted in 22 convictions. In 1965 he was designated to the Appellate Division and became Presiding Justice in 1973. Presiding Justice Marsh retired from the Court at age 70 at the end of 1978. Following his retirement, he served as a Deputy Commissioner for the Department of Environmental Conservation when he conducted hearings on the Manhattan Westway Project. He later served as a hearing officer for the State Commission on Judicial Conduct. He died on April 15, 1993.