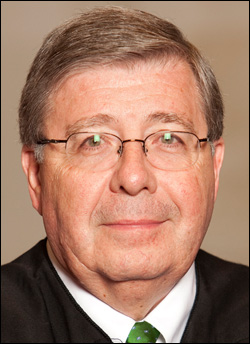 Justice Thomas E. Mercure graduated from Saint Michael’s College in 1965 and Georgetown University Law Center in 1968. A resident of Hudson Falls, in 1973 he joined the staff of the Washington County District Attorney where, from 1974 to 1977, he served as First Assistant District Attorney. Justice Mercure served as Washington County District Attorney from 1977 until 1981 and as a Washington County Judge in 1981. He also was engaged in the private practice of law from 1969 until 1981. Justice Mercure was elected to the Supreme Court in 1981 and was reelected in 1995 and in 2009. He was named a Justice of the Third Department, effective January 1, 1988. He served on the Pattern Jury Instructions Committee from 1991 through 2006, served on the State Ethics Commission of the Unified Court System from 1989 until 2003, and as its chair from 1996 until 2003. He has been a member of the Advisory Committee on Judicial Ethics and Federal – State Judicial Council since 2003. He temporarily sat on the Court of Appeals in 1994 by designation.