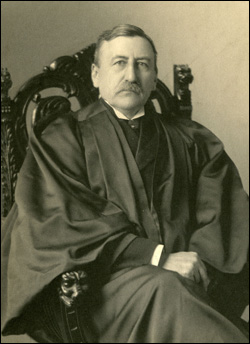 Martin Stover was born in Cobleskill, New York about 1844, the son of a Lutheran Minister. The family came to be of some local prominence in Montgomery County, New York. One of Stover’s brothers was a factory manager; the other was a physician educated at Cornell and the University of Pennsylvania. Stover practiced law in Amsterdam after his service in the army during the Civil War, and for a period sat as a Judge of the Superior Court of the City of Amsterdam. He was elected to the Supreme Court for the Fourth District in 1891. His tenure was taken up with trial work until his assignment to the Appellate Division of the Fourth Department on October 10th, 1903. There he remained until the close of 1905. Declining to run for re-election, he departed the Supreme Court entirely at that time.