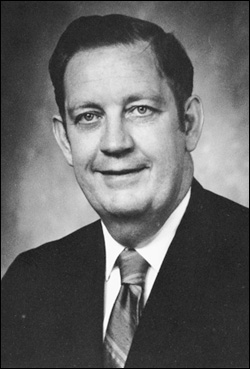 Justice John L. Larkin was born in Kingston, Ulster County, on May 7, 1923. His father was a physician in Kingston. He graduated from Holy Cross College in Massachusetts in 1943 and from Albany Law School. He served as an ensign in the United States Navy during World War II and participated in amphibious landings in the Pacific Theatre. He was wounded and spent nearly two years in naval hospitals recuperating from his injuries. He was a trial attorney in Kingston and also served an assistant Ulster County District Attorney before his election to the Supreme Court in 1970 at the age of 47. While in private practice, he was a law partner to Ulster County Judge and former Ulster County District Attorney Francis J. Vogt. Gov. Wilson appointed him to the Appellate Division in 1974. He retired from the Court in June 1979, effective July 15, 1979, and died on July 25, 1979, at the age of 56. He had had a brain tumor operation the prior year.