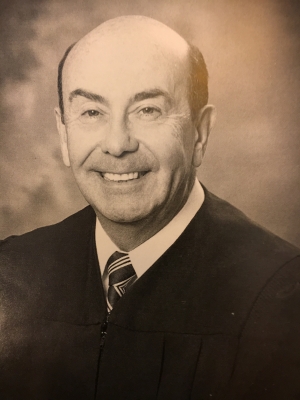 Joseph D. Valentino is a graduate of Aquinas Institute, Niagara University, and St. John’s University School of Law. He was admitted to the bar in 1973 and began his legal career as an associate attorney with the law firm of Palmiere, Passero and Crimi in Rochester, New York. In 1974, Justice Valentino was appointed an Assistant District Attorney for the Monroe County District Attorney’s Office. During his tenure there, he was the Bureau Chief of the Career Criminal Bureau. He also served as Special Assistant District Attorney in charge of major felony crimes prosecution, during which time he tried numerous felony cases. From 1980 to 1982, as Bureau Chief of all Local Courts, he was the District Attorney’s liaison with all sections of the Rochester Police Department. Justice Valentino was elected to the Rochester City Court bench in 1983. He was appointed Supervising Judge of the Court in 1984 and served in that capacity for eight years. He was re-elected in November of 1993 to a second 10-year term on the bench. Since 1987, Justice Valentino has been an Adjunct Professor at the Rochester Institute of Technology, where he teaches courses on the criminal justice system. From March 1997 until December of 2001, Justice Valentino presided over Rochester’s Drug Treatment Court, and in March of 2000, he was appointed an acting Monroe County Court Judge to preside over all felony cases referred to the Rochester Drug Treatment Court. He was a board member of the New York State Drug Treatment Court Association and has presented at both National and State Drug Court Conferences. In November of 2001, Justice Valentino was elected to the New York State Supreme Court, Seventh Judicial District, to serve a fourteen year term. In 2003, he was appointed to the New York State Jury Trial Project, the Appellate Division Fourth Department Law Guardian Advisory Committee, and the State-Federal Judicial Council. In 2009, Justice Valentino was appointed as a Member of the Character and Fitness Committee for the Seventh Judicial District. In 2011, he was appointed Supervising Judge of the Criminal Term for the Seventh Judicial District. Governor Andrew M. Cuomo appointed Justice Valentino to the Appellate Division, Fourth Department on October 1, 2012. He is married to Janet (Jones) Valentino and is the proud father of four sons, four daughters-in-law, and grandfather of nine grandchildren.