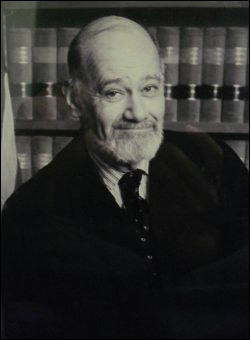 Ernst H. Rosenberger was born in 1931 in Hamburg, Germany. He and his family emigrated to the United States in 1935, settling in New York City. He attended public schools in Manhattan and graduated from Stuyvesant High School. After serving in the U.S. Army for two years, he attended City College of New York, graduating in 1955. He received his law degree in 1958 from New York Law School, where he was editor in chief of the Law Review. Later on, he received his LL.M. from the University of Virginia School of Law. He is admitted to practice in New York, U.S. District Courts, U.S. Court of International Trade, U.S. Court of Appeals, U.S. Supreme Court, as well as Hamburg, Germany.

Justice Rosenberger was in private practice from 1958 to 1972 in New York City, where he tried civil and criminal cases in state and federal courts. He was a cooperating attorney for the American Civil Liberties Union and the Legal Aid Society.

His judicial career began in 1972, when he was appointed to the Criminal Court of the City of New York by Mayor John V. Lindsay. One year later, he was designated Acting Justice of the Supreme Court. He remained in that position until November of 1976, when he was elected to the Supreme Court. In 1978, Governor Hugh Carey designated him Presiding Justice of the Supreme Court’s Extraordinary Special and Trial Term for investigation of corruption in the criminal justice system. Justice Rosenberger was appointed to the Appellate Division, First Department by Governor Mario Cuomo in 1985, and he remained on that bench until his retirement in 2003. In March 2004, he joined Stroock & Stroock & Lavan LLP as Of Counsel.