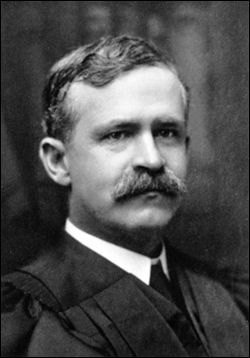 Justice Sewell also sat on the bench of the 3rd Department; more information can be found HERE.

Justice Albert H. Sewell was born on October 30, 1847 in Hamden, Delaware County, NY. He graduated from Walton Academy in 1867 and studied at Union College for one year before entering Cornell University as part of the inaugural class in 1868. He earned degrees from Cornell University in 1871 and Albany Law School in 1873. Sewell was admitted to the bar that year and begin practicing law in Walton, NY at the Sidney Center. In 1878, he served as a Member of Assembly from Delaware County.

Sewell continued to practice law until he won election as county judge and surrogate for Delaware County in 1889, a position he held for ten years. In 1899, he was named by Governor Theodore Roosevelt to the Supreme Court for the Sixth Judicial District, and his appointment was confirmed in that year’s election. From 1900 until 1901 he served on the Appellate Division, Second Department. Justice Sewell left the bench to return to trial work, and was often designated by the Governor to extraordinary terms. Then, in 1907, he returned to the Appellate Division by appointment of Governor Hughes, this time serving in the Third Department. He served until 1912 and again during the year 1917, when he reached the mandatory retirement age. Sewell continued to serve as an official Referee until 1924.

“Other Sixth Judicial District Judges.” History of the Appellate Division, Third Department. The Historical Society of the Courts of the State of New York. Web. 2 July 2012. http://www.courts.state.ny.us/history/elecbook/3d_dept_hist/pg20.htm.