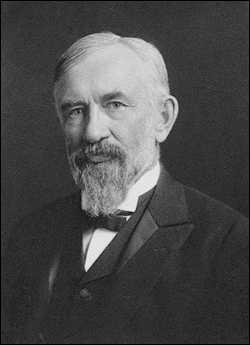 Judge Judson S. Landon was born in Salisbury in Litchfield County, Connecticut, on December 16, 1832. He attended Amenia Seminary and the New York Conference Seminary, taught Latin and the sciences at the Academy at Princetown, Schenectady County, New York, and studied law for one year (1854) at the Yale Law School. He received the degree of A.M. from Union College in 1855 and that of LL.D. from Rutgers College in 1885. He was admitted to the bar in 1856. He served as Schenectady County District Attorney from 1857 to 1862; County Judge from 1865-1869; a delegate to the State Constitutional Convention of 1867 (at which Presiding Justice Parker was also a delegate); City Attorney in 1872; and a Justice of the Supreme Court from 1874 to 1901 (elected in 1873 and reelected in 1887). While serving as a Supreme Court Justice, Judge Landon served as a member of the General Term, then on the Appellate Division, Third Department (from 1896 to 1899), and on the Second Division of the Court of Appeals (this was a court established by constitutional amendment in 1888 to help the Court of Appeals deal with its backlog; it was composed of seven Supreme Court Justices appointed by the Governor; it operated from 1889 to 1892). Judge Landon served as an associate judge of the Court of Appeals in 1900 and 1901. He was appointed by Governor Roosevelt under a law which made it possible to assign Supreme Court Justices to relieve the stress of work there. He served until the age limit barred him. He resumed private practice in 1902. In 1904, he was appointed by the Legislature as a member of the Board of Statutory Consolidation. Judge Landon was for 28 years a trustee of Union College and for 27 years a trustee of Albany Law School (he also served on the law school faculty). He was president ad interim of Union College from 1884 to 1888. He authored “The Constitutional History and Government of the United States”, published by Houghton, Mifflin & Co. of Boston. He died September 7, 1905, at the age of 75.