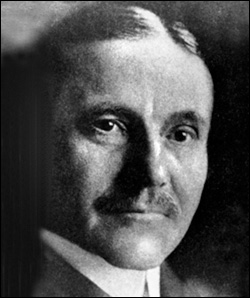 Justice Edward C. Whitmyer was born May 5, 1861, in Schenectady. He was educated in the public schools and then at the Preparatory School of Union Classical Institute (the high school), from which he graduated in 1877. He then attended Union College, graduating in 1882. He then moved to Canton, St. Lawrence County, to be employed as an instructor of Latin and Greek at the Canton Union School. While in Canton, he was a law student in the law office of Supreme Court Justice Leslie W. Russell. He was admitted to the Bar in 1887 and took up practice in his home town of Schenectady. In 1894, he was a delegate to the Constitutional Convention. From 1903 to 1909, he was Schenectady County Surrogate. From 1909 to 1912, he was county judge. He was elected to the Supreme Court for the Fourth Judicial District in 1912 and was re-elected 14 years later. On January 27, 1927, Gov. Smith named him to the Appellate Division. He retired at the end of 1931 after reaching the age of 70. He died on May 20, 1933.