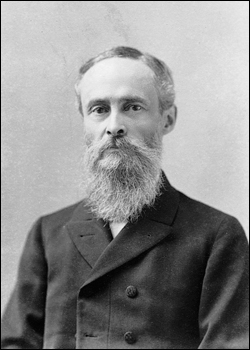 Justice Milton H. Merwin was born at Leyden in Lewis County, New York, on June 16, 1832. He was descended from Miles Merwin who came from the north of England and settled near Milford, Connecticut, about 1640. Justice Merwin’s grandfather, James Merwin, served as a soldier in the War of 1812. Justice Merwin attended the Oneida Conference Seminary at Cazenovia, New York, and later matriculated at Hamilton College, from which he graduated in 1852, being then 20 years of age. He studied law in the office of Joseph Mullin, at Watertown, New York, who was afterwards a Justice of the Supreme Court. Judge Merwin was admitted to the bar in 1853. He studied with Mullin until 1857 (when he became a judge) and then practiced alone, having become well established with a lucrative and growing clientage. He was elected special Surrogate of Jefferson County in November 1854 and served for three years. In November 1859, he was elected Surrogate of the county and served until January 1, 1864. In 1867, he was elected as a delegate to the State Constitutional Convention (Judges Parker and Landon were also delegates). On May 21, 1874, Judge Charles H. Doolittle of Utica, a Justice of the Supreme Court of the Fifth Judicial District, lost his life by being swept overboard from an ocean steamer at sea. It was generally conceded in the district that the vacancy should be filled by someone residing in Oneida County and Governor John A. Dix announced that he would appoint to the judgeship any lawyer whom the Republican lawyers of the county should agree upon. Although there were other candidates seeking the position (including Ward Hunt Jr., whose father was a member of the New York State Court of Appeals from 1866 to 1869, a New York State commissioner of appeals from 1869 to 1873, and had been named to the United States Supreme Court by President Grant in December 1872), Justice Merwin from Jefferson County was nominated on the fifty third ballot at the Republican judiciary convention in Utica in September 1874. Governor Dix appointed Justice Merwin to the position on October 17, 1874, and he took the oath of office two days later, opening his first term of the circuit term at Lowville on October 20. At the ensuing November election, he was elected over Albertus Perry, and entered upon a 14-year term of office on January 1, 1875. After his election, Justice Merwin moved to Utica and thereafter made his home there. He was reelected to a second term on the Supreme Court without opposition. On December 31, 1888, he was appointed one of the justices of the General Term and held this position until January 1, 1896, when he began his service as an associate justice of the Appellate Division, Third Department. He served as an appellate court judge until January 1, 1910, when he returned to the trial term and there continued until by age limit and also by the expiration of his term he retired from the bench on January 1, 1903. Thereafter, he frequently served as a referee by appointment of the courts and by request of litigating parties and he also appeared in a number of important causes as counsel. From 1904, he practiced with his son, James H., in the Utica firm of Merwin & Merwin.