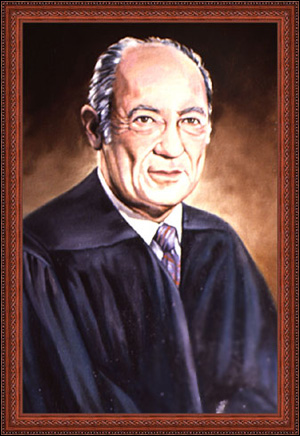 Jacob David Fuchsberg was born June 14, 1913 on the lower east side of Manhattan. He graduated from New York University School of Law in 1935, after serving as a member of the Law Review. He practiced law with Cohen & Fuchsberg and Fuchsberg & Fuchsberg in New York, becoming senior partner in the latter in 1950. One of the nation’s preeminent trial attorneys, he was the first litigator in the nation to obtain a one-million-dollar jury verdict. He was President of the New York State Trial Lawyers Association from 1957 to 1959, and President of the Association of Trial Lawyers of America in 1963 and 1964. In 1965, he succeeded Dean Roscoe Pound to the first of eight consecutive terms as President of the Roscoe Pound — American Trial Lawyers Foundation. That year, he was appointed a member of the National Advisory Committee of the Legal Services Program of the U. S. Office of Economic Opportunity under President Lyndon Johnson and subsequently became a member of its Executive Committee, serving until its existence was terminated by President Nixon in 1973.

Active in legal education, he served as a member of the Board of Trustees of Touro College from its inception in the early 1970s, and was an early and persistent advocate for the establishment and accreditation of the Law Center, which now bears his name. He also served as a trustee of the New York University School of Law, where a building is named in his honor.

Elected Associate Judge of the Court of Appeals in 1974, he served until 1983. During his term in office, Judge Fuchsberg was not a stranger to controversy.

In 1977, Chief Judge Breitel convened a Court on the Judiciary “to take appropriate action, if any, regarding his sales, purchases, and exchanges of New York City notes and Municipal Assistance Corporation bonds.”1 The investigation was later expanded to include other matters, including “allegations that [he] obtained the advice and assistance of experts on the law and others in proceedings before the Court of Appeals in a manner not consistent with the requirements of section 33.3 of the Rules Governing Judicial Conduct … and Canon 3 of the code of Judicial Conduct.”2 A majority of the Court on the Judiciary issued an opinion of censure, concluding that Judge Fuchsberg’s “purchases and exchanges of New York governmental securities, his participation in cases potentially affecting the value of these securities, and his consultations with outside experts in some respects violate the [applicable] Rules and Canons,”3 but further concluding that “preferral of charges seeking his removal from office is not warranted.”4

The New York Times reported that “legal experts said he had dissented from court opinions more than any other judge, often filling his dissents with rhetorical flourishes.”5 He was viewed as a liberal on criminal issues. During the 1981-82 Court year, Judge Fuchsberg was the only judge to vote for the defendant in all 10 criminal cases in which the court split four to three. He was the lone dissenter in Board of Educ. v. Nyquist (57 NY2d 27), which upheld the State’s system of financing public education. In an interview upon the occasion of his retirement, he said: “I do not think of decisions in terms of persons or property, but whether we suffer in our liberties in America. We have great institutions, and as a judge I have upheld them, and I am proud of my record.”6

Judge Fuchsberg resigned in 1983 before the end of his term to return to private practice, founding the Jacob D. Fuchsberg Law Firm and including as partners two of his children, Rosalind and Alan. Reporting his resignation, the New York Times recounted that Judge Fuchsberg led a movement of protest some three years earlier against the University Club in Albany, which did not permit women members at the time. A mass resignation of judges from the club followed, and continued until the club reversed its policy. The judges reapplied for membership and a farewell dinner for Judge Fuchsberg was the first function they attended there after their memberships were reinstated.7 At his retirement ceremony, he stated: “As you know, ours is the most forward looking rule on the right to counsel in criminal cases. … There is the choice. Diminish the rights and lower the need for counsel, thus sacrificing our liberties to our insecurities. Or, as we have done, maintain and, if possible, increase respect for the rights of people and, with it, the guarantee of counsel to enforce them. We cannot have it both ways. In short, on right to counsel, we have chosen liberty over security.”8

Judge Fuchsberg died August 27, 1995, at age 82, survived by his wife of 57 years, the former Shirley Cohen, three daughters, and a son, as well as ten grandchildren and four great-grandchildren. Shirley Fuchsberg passed away in April 2003. Judge Fuchsberg is buried in Sharon Gardens Cemetery, Valhalla, New York.