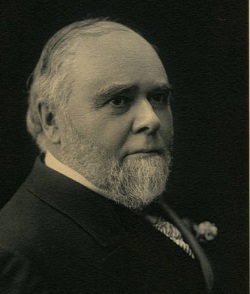 John M. Davy was born in Ottawa, Ontario, Canada on June 29, 1835. His family moved to Monroe County during his infancy, where he remained until his death. He was educated at public schools and read law in the offices of Strong, Palmer & Murford. He abandoned his legal studies in 1862 to participate in
organizing Company G of the 108th Regiment of the New York Volunteers in which unit he was appointed First Lieutenant. His Civil War service in the Union Army ended with a medical discharge the following year. He returned home and was admitted to the bar in December 1863, beginning his private practice.

Davy was an active Republican party member and in a few years received patronage in the form of an appointment to the post of Collector of the Port of Genessee in 1866. He returned to private practice in 1867. The following year he was elected District Attorney for Monroe County, a position he held from 1869 to the close of 1871 (one term). Afterward, he was appointed to a second tour as Collector of the Port of Genessee. He gave it up after his election to the U.S. Congress in 1874, where he sat from 1875 to 1877.

Davy returned to private practice for twelve years after his stint in Congress (1877-89). At the close of this period he was elected to the State Supreme Court for the Seventh District where he sat from 1889 to his mandatory retirement at the close of 1905. He had two brief tours on the Appellate Division for the Fourth Department. He was temporarily appointed on December 30, 1901. The appointment was revoked in May 1902 and he was reappointed on September 23, 1902. The final appointment lapsed December 8, 1902. He practiced law privately on his departure from the bench until his death on April 21, 1909.