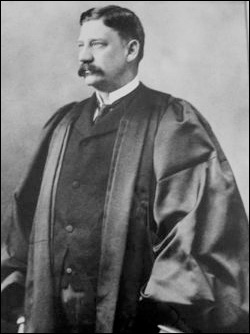 Born in 1848 in New York City, to Thomas and Eleanor Augusta Scott, Justice Scott graduated from City College of New York in 1867 and received his law degree from Columbia Law School in 1869. That same year he was admitted to the New York Bar.

Shortly after being admitted he served as clerk to Judge Josiah Sutherland for a year. He found that both the law and politics suited him very well, and joined the Young Men’s Democratic Club. Justice Scott became powerful in the County Democracy, working to elect Mayors Franklin Edson followed by William R. Grace two years later.

In 1885, Justice Scott was appointed Assistant Corporation Counsel of New York City. In 1888, he became Aqueduct Commissioner of New York City and served in this position for seven years. In 1890, Justice Scott accepted the nomination of the People’s Municipal League as a candidate for the office of Mayor of the City of New York, but was not elected.

In 1895, Justice Scott was appointed Corporation Counsel of the City of New York by Mayor William L. Strong. Two years later, he was elected a Justice of the Supreme Court of the State of New York, for a 14 year term beginning January 1, 1898. On the last day he held the post of Corporation Counsel, Justice Scott rendered a judgment which forced the Controller to pay $700,000 to various contractors who had worked on the Croton Aqueduct. The Controller brought this matter before the New York State Court of Appeals. The Court ruled in favor of the Controller. This decision resulted in the enactment of the Confessions of Judgment Bill, which prohibits the Corporation Counsel from taking such action without the consent of the Controller.

In 1906, Governor Frank W. Higgins designated Justice Scott, who was serving as a temporary member of the Appellate Division, as a permanent member of that bench. He remained at the Appellate Division until his retirement in March of 1918, when he resigned to join the law firm of Scott, Gerard & Bowers (formerly Bowers & Sands). Justice Scott was 70 years of age at that time. He was considered to be one of the strongest members of the Appellate bench, and was known for always writing his opinions in longhand rather than dictating them to a stenographer.

Justice Scott succumbed to pneumonia on February 5, 1922 at the age of 74. He was married to Lucy Parkman Higgins Scott in 1878 and had two children, Eleanor S. and Margaret S.