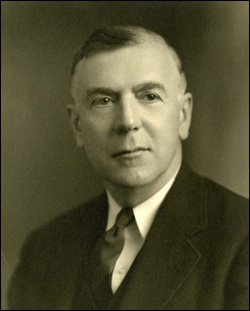 Raymond C. Vaughan was born in 1887 in Lapier, Michigan, the son of a prominent political functionary who was once the Michigan Secretary of State. His family moved to New York in his infancy and he grew up in Franklinville. He attended the University of Michigan from which he received a law degree, was admitted to the bar in 1910, and began practice in partnership in Buffalo.

During this time, Vaughan long represented the International Rail Company. He was elected to the Supreme Court for the Eighth District in 1936, sitting as a trial judge from 1937 to 1948, then on the Appellate Division Fourth Department from January of 1948 to his retirement at the close of 1957. He resumed his private practice in 1958, remaining so engaged until his death in Buffalo on December 9, 1964.