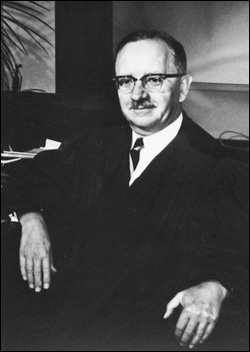 Justice Halpern also sat on the bench of the 4th Department; more information can be found HERE.

Justice Philip Halpern was born in Buffalo on November 12, 1902. Educated in the public schools, he was graduated from Hutchinson High School. In 1923, he graduated from the University of Buffalo Law School. He then attended the School for Social Research in New York City for a year. He was admitted to the Bar in 1924. For two years, he was associated with the general counsel of the Brooklyn Manhattan Transit Co. He then returned to Buffalo and began practicing law. In 1931, he formed a partnership with his brother-in-law, Milton H. Friedman. This partnership continued until Justice Halpern was elected to the bench in 1947. From 1925 to 1943, he was professor at the University of Buffalo Law School, most often teaching torts and criminal law; he also served as acting dean and dean (1943 to 1947) and acting dean (1952 to 1953). He founded the Erie County Bar Bulletin and was its editor for several years (1933 to 1938). He was a delegate to the 1938 Constitutional Convention and left his mark by writing several amendments that became part of the State Constitution. One such amendment protects the power of grand juries to make inquiries into the conduct of public officials. During World War II, Justice Halpern was a Referee for the National War Labour Board and a member of the Enemy Alien Board; he was also a private in the New York State Guard. Justice Halpern’s career in public service began in 1944 when Gov. Dewey appointed him Chief Counsel to the State Public Service Commission. He was elected to the Supreme Court in 1947 and Gov. Dewey appointed him to the Appellate Division, Third Department, in 1952. Effective at the beginning of 1958, Gov. Harriman transferred him to the Fourth Department. He was re-elected to the Supreme Court in 1961. In 1958, Justice Halpern was appointed to the Advisory Council to the International Writers Association for the United Nations because of his work on behalf of human rights. For eight years, he represented the United States on the United Nations Sub-commission on Prevention of Discrimination and Protection of Minorities. He and Eleanor Roosevelt were members of the Advisory Council to the United States delegation to the United Nations Commission on Human Rights. At the United Nations in 1960, Justice Halpern was a co-sponsor of a resolution that condemned anti-Semitism for the first time by a United Nations body. Justice Halpern died on August 25, 1963 in Buffalo at the age of 62, while still serving on the Appellate Division, Fourth Department.