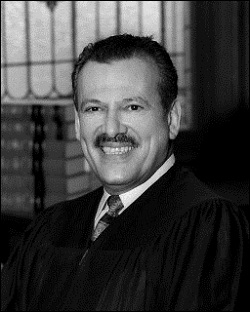 Justice Luis Antonio Gonzalez was born in Manati, Puerto Rico in 1945. His parents migrated to New York in the 1950s seeking an opportunity to provide a better life for their children. Justice Gonzalez and his siblings were raised in Hell’s Kitchen where they attended New York City public schools. He later earned a B.A. from Eastern Mennonite College in 1968 and a J.D. from Columbia University School of Law in 1975.

Justice Gonzalez’s legal career has been one primarily dedicated to public service. Upon his graduation from Columbia in 1975, he served as an Examining Attorney for the New York City Department of Investigation. Three years later he accepted a position as general counsel to the national director of the Government of Puerto Rico and worked in that agency’s office from 1978 to 1980. He was also a hearing Officer for the New York State Division of Housing and Community Renewal from 1981 to 1984.

In 1985, Justice Gonzalez was appointed Housing Court Judge in the New York City Civil Court. Two years later, he was elected Justice of the Civil Court in Bronx County, where he served until 1992. During that year he was elected Justice of the Supreme Court in Bronx County and six years later was elevated to the Appellate Term, First Department – the first Latino to hold that position. After serving in that capacity for one year, Justice Gonzalez was appointed the Administrative Judge of the Supreme Court, Bronx County.

In 2002, Governor George E. Pataki appointed Justice Gonzalez to the Appellate Division, First Department. In 2009, Governor David Paterson appointed him Presiding Justice of that court, where he served until his retirement from the bench in 2015. Upon his departure from the court system, Justice Gonzalez joined NAM (National Arbitration and Mediation).

In addition to his judicial duties, Justice Gonzalez was a member of the Association of Justices of Hispanic Heritage, where he served as its president from 1989-1993.