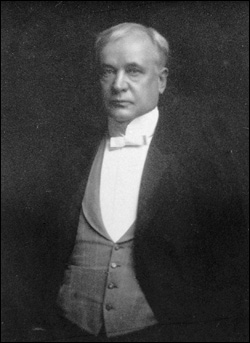 Justice D. Cady Herrick was born in the Town of Esperance in Schoharie County on April 12, 1846. His family moved to Albany when he was six years old. Though lame from infancy, he engaged in sports, taking his chances with the other boys in coasting down the steep hill on Lydius Street. He attended Albany’s public schools and later graduated from Professor Anthony’s Albany Classical Institute, a boarding school. He studied law with Gen. Lyman Tremain and the elder Peckham (Tremain & Peckham), at Albany, and then took a course at the Albany Law School, from which he was duly graduated in 1868. One of his classmates was the future President of the United States, William McKinley. He then was admitted to the bar in 1868 and began practicing law in Albany. Until 1870, when he hung out his own shingle, he was engaged in the offices of Hungerford & Hotaling in the further prosecution of his studies of the law. Early in his career, he became very involved in politics as a member of the Democratic Party. He first became prominent as a lawyer in his defense of the murderer Emil Lowenstein, receiving the highest praises for his eloquent appeal to the jury. Lowenstein was, however, convicted. The Judge gained a reputation which brought him clients in numbers and laid the foundation of a successful practice. Prior to his defense of Lowenstein, he had gathered only scanty returns as a lawyer. In his first year he made only $25, and in his second, $250. His income was still only modest when the Lowenstein matter came along. The senior counsel, John Nelson, one of the noted criminal lawyers of the day, fell ill, and Judge Herrick took over the conduct of the trial. A division in his party caused his defeat for District Attorney in his first bid for that office; he mounted a successful bid at the next election in 1880 and served two terms. It is reported that on the election night of his first bid for District Attorney he was waited on by politicians who suggested the transposition of the figures for County Clerk and District Attorney in several of the election districts, so that they would elect the Republican candidate for county Clerk and himself the Democratic candidate for District Attorney. He responded, “Gentleman, I don’t want any office to which the people haven’t seen fit to elect me.” He opposed the scheme so stoutly that it was dropped. From 1886 to 1891, he served as Albany’s corporation counsel (he resigned the District Attorney post to take the position). In 1891, he was elected Justice of the Supreme Court. He served on the General Term and then on the Appellate Division from 1896 until 1900. He resigned in 1900 to return to the trial bench, by individual preference. Justice Herrick was one of the political lieutenants of Daniel Manning, succeeding him as a member of the Democratic State Committee from Albany County, which position he resigned upon his election to the Supreme Court. Even during his years as a judge, however, he remained the recognized leader of his party. But no one ever intimated that his interest in politics colored his decisions and, on several occasions, he decided adversely to the interests of his party. He retained the office of Justice of the Supreme Court until 1904 when he resigned to become the unsuccessful candidate of his party for Governor. Thereafter, he continued in the private practice of law, with offices in Albany and New York City, with his son Charles J. Herrick, who also served as an Albany County District Attorney. He died February 21, 1926, at the age of 80. The clerk of the Appellate Division, Third Department, from 1925 to 1956, John S. Herrick, was a first cousin of Justice Herrick.