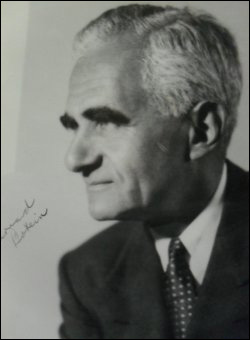 A principal figure in New York City’s legal establishment, Justice Bernard Botein was active in court reform and had an “abiding concern for the law’s impact on the underprivileged.” As Presiding Justice of the Appellate Division First Department, he instituted a 24-hour arraignment system to shorten the time defendants spent in police lock-up. And, he was an enthusiastic supporter of the system of releasing a defendant on his own recognizance until trial. Botein led the fight for court reorganization that resulted in 1962 in a centralized court system under the control of the Administrative Board of the Judicial Conference, consisting of the Chief Judge of the Court of Appeals and the four Presiding Justices of the Appellate Division. Prior to that, the state’s courts were divided into what he called “notorious islands of judicial power.”

Bernard Botein was born in New York City on May 6, 1900. When he was six years old he lost his father and had to work his way through Morris High School, City College and Brooklyn Law School, holding down such jobs as newspaper carrier, flower delivery person, clerk in an insurance office, and clerk in the “morgue” of the old New York Sun. His color blindness caused some difficulties in the flower delivery job but did not prevent his service in the Army as a private in World War I.

Botein was hired as an Assistant District Attorney in Manhattan in 1929, where he distinguished himself as head of the Accident Fraud Bureau, which produced convictions of more than 200 ambulance-chasing lawyers, doctors and professional accident victims. Governor Herbert H. Lehman appointed him general attorney for the State Insurance Fund in 1938 for an inquiry that led to conviction of 18 auditors for bribery and other crimes, dismissal of 40 others under Civil Service procedures, and conviction of nearly 150 businessmen for forgery and larceny. In 1940 Governor Lehman appointed Botein counsel for another special state investigation, this one looking into state printing contracts. This inquiry resulted in 14 possible prosecutions, two leading companies being disqualified for state contracts, and recommendations aimed at saving a large percentage of the state’s annual printing costs.

In 1941 Governor Lehman named Botein to the Supreme Court. He was elected to a full, 14-year term the following year. Some of his decisions on that bench drew wide attention. Among them was the case in 1942 in which he ordered the eviction of the Collyer brothers, who lived in a junk-cluttered home in Harlem and had not paid interest on their mortgage for two years. In 1950, he ordered the special mayoral election after the resignation of William O’Dwyer.

Governor Thomas E. Dewey appointed Justice Botein to the Appellate Division First Department in 1953. In 1958 Governor Averell Harriman named him Presiding Justice, a position he held until 1968. During this time, he developed a reputation as an innovative administrator and passionate advocate of reform.

Justice Botein resigned in 1968, having spent 27 years on the bench, to become the leading partner in the law firm of Botein, Hays, Sklar & Herzberg. When announcing his resignation, Botein stated that “the judicial robe can be very hampering, sometimes even a straitjacket, when vigorous action is required.” After his resignation he kept active in law and politics. He served as President of the Association of the Bar of the City of New York from 1970 to 1972.

In addition, Botein was co-chairman of Frank S. Hogan’s primary campaign against William J. vanden Heuvel in the 1973 District Attorney’s race, and he headed a group of Democrats who supported Charles Breitel in his successful campaign against Jacob Fuchsberg for the office of Chief Judge of the State of New York. He was also one of the sponsors of a lawyers’ protest against the Vietnam war in 1970.

Justice Botein wrote many legal papers and was the author of The Slum and Crime, Trial Judge, The Prosecutor, The Trial of the Future: Challenge to the Law, and Our Cities Burn While We Play Cops and Robbers. Reviewers credited him with “a narrative skill that many a professional writer might envy.”

After his death, an award was established in the First Judicial Department in memory of Justice Botein to recognize “outstanding contributions to the administration of the courts” by deserving individuals. The Bernard Botein Medal is awarded annually.