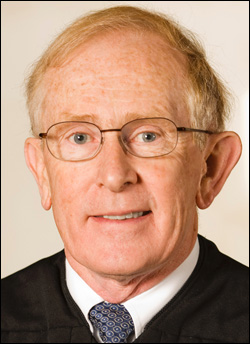 Justice Edward O. Spain was designated a Justice of the Third Department effective December 30, 1994. He began his legal career in private practice in 1966 with his father in Troy. In 1967, he served as an Assistant District Attorney for Rensselaer County until he was called to active duty in the United States Navy, Judge Advocate General corps; he was honorably discharged in 1972 with the rank of lieutenant. Justice Spain returned to private practice and served as Deputy Corporation Counsel for the City of Troy for two years. In 1977, Justice Spain served as Deputy Clerk of Rensselaer County Surrogate’s Court and was elected to Troy Police Court, where he served until he was elected to the Rensselaer County Family Court in 1985. He was elected to the Supreme Court in 1991 and, in January 1994, he was appointed Administrative Judge for the Third Judicial District. He was re-elected to the Supreme Court in 2005. Justice Spain is a graduate of LaSalle Institute in Troy, Boston College and Albany Law School.