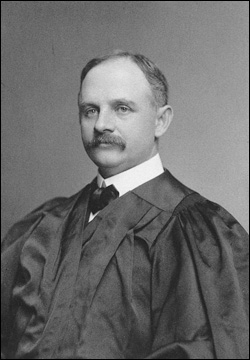 Justice Smith also sat on the bench of the 3rd and 4th Departments; more information can be found HERE and HERE, respectively.

Born in Ithaca, New York in 1856 to Horace Boardman Smith (who was later appointed a Supreme Court Justice himself) and Ellen Hays, Justice Smith attended public school in Elmira, New York. In 1877, he graduated from Princeton University and began to study law in his father’s office. He was admitted to the bar in 1879.

In 1884, Justice Smith was a delegate to the Republican National Convention. In 1888, he was appointed to the Supreme Court, Sixth Judicial District, by Governor David B. Hill to complete his father’s term on the bench. After receiving this designation, Justice Smith was no longer active in politics. At that time he was the youngest lawyer to ever have been appointed to that office.

In 1891, Justice Smith rendered an important decision which came to be known as the Harrow Trust Case between a trust consisting of twenty firms which manufactured harrows (farm tools used in soil aeration, weed control and moisture conservation) and one of its members which wanted to get out of it. According to the trust, all patents, rights and privileges of its members were surrendered for a period of fifty years, thus giving it total control of all manufacture and sale in the United States. Justice Smith ruled against the trust and in favor of the plaintiff company. His decision made people aware of the trust’s existence, which was previously known to only a small select group.

In 1915, Justice Smith was designated an associate justice of the First Department by Governor Charles S. Whitman. He remained on the First Department bench until 1925 when he retired to go into private practice. After leaving the bench, he also acted as referee in many important cases. Justice Smith’s judicial service covered a period of 37 years.

In 1928, Justice Smith and his wife were on a cruise when he became ill. They left the ship and he was taken to a hospital in Bermuda, where he passed away on April 18, 1928 at the age of 72.

Justice Smith was married to Jessie Gonzales Smith in 1893 and had two sons, Wilton Lloyd and Parker Lloyd.

The Historical Society of the Courts of the State of New York, History of the Third Department, p. 12, http://www.nycourts.gov/history/elecbook/3ddepthist/pg.12.htm