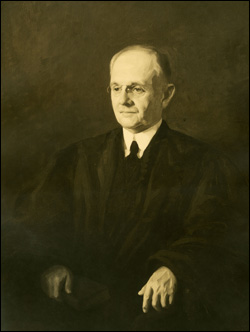 Justice Smith also sat on the bench of the 1st and 3rd Departments; more information can be found HERE and HERE, respectively.

Walter Lloyd Smith was born on April 18, 1856 in Elmira, New York, the son of J. Boardman Smith, a lawyer and later a Supreme Court Justice for the Fifth District. He attended the public schools in Elmira and later Princeton University, where he received a Bachelor’s Degree. He read law in his father’s office and was admitted to the bar in 1879.

When the senior Smith resigned from the bench in 1888, his son was appointed as his replacement, the youngest lawyer ever to receive such a designation. The electorate was agreeable with this family “succession” electing the younger Smith to three successive terms on the Court – an unusual if not unique feat – sitting from his appointment in 1888 to his resignation in October of 1925, for a total of thirty-seven years. He presided as a trial judge for eleven years before being appointed to the Appellate Division of the Fourth Department in the Fall of 1899. The following Spring, he was transferred to the Third Department, where he remained until the close of 1914. From 1907 to the completion of his tenure in the Third Department, he sat as Presiding Justice. In 1915 he was transferred yet again to the post as Associate Justice of the First Department, on which Court he remained until the end of 1924, completing his service of twenty-five years as an Appellate judge in three different departments. His resignation from the Supreme Court came ten months later, after which he returned to the private practice of law. He died on the Island of Bermuda on March 5, 1928.