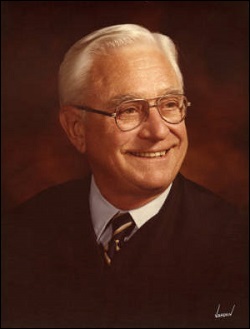 Emmett J. Schnepp was born on August 16, 1910. He graduated from law school and was admitted to practice in 1935. From 1942 to 1945 he served as a special agent for the Federal Bureau of Investigation, returning to private practice in 1945. In 1962 he was appointed to the Children’s Court by Governor Nelson A. Rockefeller and was elected to Family Court for a ten year term in November of 1962. In November of 1967 he was elected to the Supreme of the Seventh Judicial District and became the Administrative Judge for Criminal Justice. He was appointed as an Associate Justice of this Court by Governor Hugh Carey on May 10, 1978. Following his retirement in 1986, he served as a Judicial Administrative Officer and as a Judicial Hearing Officer until his death on July 25, 1991.