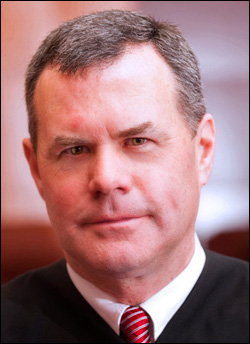 Justice John C. Egan Jr. was appointed to the Appellate Division, Third Department, effective February 4, 2010. He graduated from Bryant College in 1976 and from Albany Law School in 1980. He was admitted to the practice of law in 1981. Justice Egan engaged in private practice from 1981 to 1996. He served as Assistant Corporation Counsel for the City of Albany from 1981 to 1996. He also served as part-time law clerk in Albany County Surrogate’s Court. He has served as Counsel, Third Department Judicial Screening Committee. Justice Egan was elected Albany City Court Judge in 1996. He was elected Supreme Court Justice for the Third Judicial District in 2005.