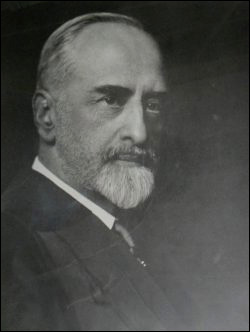 Eugene A. Philbin was born in New York City on July 24, 1857. He graduated from College of St. Francis Xavier, Seton Hall College and Columbia University Law School, after which he was admitted to the Bar in 1886. He went into private practice with the firm Beekman & Ogden, which was reorganized in 1894 to become Philbin, Beekman & Menken.

In 1899 Governor Roosevelt appointed him District Attorney of New York County to fill the vacancy caused by the removal of Col. Asa Bird Gardiner. He served until the end of that term in 1901. President Roosevelt appointed him to a citizens group investigating conditions at Ellis Island. He became a member of the Board of Regents in 1904. Philbin was also president of the Parks and Playground Association of New York City until 1913, where he became known for his public service in protecting parks.. During that time he lead the opposition to various plans to alter the present treatment and use of Central Park, such as the plans to install the old Lenox Library building there and to turn the Arsenal into a museum of safety.

Governor Sulzer appointed Philbin to the Supreme Court Bench of the 1st Judicial District in 1913. He was elected later that year to a full 14-year term. Governor Smith designated him to the Appellate Division First Department in 1919, where he remained until his death.

Justice Philbin had been active in the Catholic church, and in 1908 Pope Pius X made him a Knight Commander of the Order of St. Gregory the Great.

He married Jesse Holladay Philbin in 1887, and they had five children. He died of pneumonia while still on the Appellate Division bench on March 14, 1920.